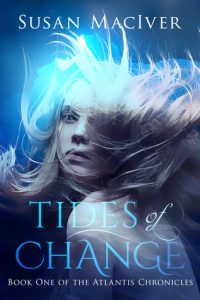 Now, an Amazon #1 Best Seller, “Tides of Change,” Book One of “The Atlantis Chronicles” trilogy, begins far beneath the wild beauty of the Aegean Sea. Having survived one horrific cataclysm, a society as ancient as time now thrives untouched and undiscovered in blue waters once ruled by Poseidon

Unknown to any but their Healer, a devastating secret threatens Atlantis with yet another extinction event. The matriarchal healing line, descended from Poseidon,s no longer has an heir. In a desperate bid to ensure the continuance of their small, underwater community, Na-Kai eva Evenor, Most Sovereign Healer of Atlantis, unleashes a power the Healers have been expressly forbidden to use from the beginning of time.

Rising from the hidden depths of Atlantis, Na-Kai’s telekinetic web of energy shimmers to a halt atop the jagged, volcanic cliffs of the exotic Greek island of Santorini.

Compelled from her hotel room to the very edge of the dark, windswept cliffs, Daria Caiden is trapped in the grasp of Na-Kai’s relentless thought-form. Forced to dive from the precipice, Daria is pulled deep into the sapphire waters below. Floating in midnight quiet, she releases her last breath, and waits to die.

In one shattering moment, events are set into motion that will bring about catastrophic change. Changes that no one could foresee.

It’s kind of funny thinking about it now, but I was actually a little bit hesitant to start reading this book when I received my copy in the mail a few weeks ago. I’d never heard of the author before and I’ve read some fairly bad books over the last couple of weeks which has made me a bit more picky than usual lately when it comes to what I read. I’m really glad that I decided to give Tides of Change a chance though as it ended up being one of my favorite books of the year so far. I once again made the mistake of trying to read a chapter or two before bed to see what the book was like and ended up reading until nearly 5 AM.

While there was a lot that I loved about Tides of Change, there were a couple things that I thought really stood out about the book. First was the amount of research that the author had to have done to create such a detailed and believable world. I’ve always enjoyed reading stories about Atlantis and I think Susan Maciver did a fantastic job of creating a beautiful and unique version of the legend. I think I would have to say that Tides of Change is probably my favorite take on the story of Atlantis right now.

I also thought the author did an amazing job with the characters that she created for this book. I found every single one of them to be well written and fleshed out characters that were surprisingly easy to empathize with. My only complaint would have to be that I thought the dialogue between them seemed a bit forced or stilted at times, though it honestly could have just seemed that way because I was a bit exhausted by the time I reached the end of the book.

I think this book would appeal to just about anyone who likes to read, no matter what their preferred subject or genre is. I’ve actually already started recommending it to just about everyone I know. I don’t know how I’m going to manage the wait for the next book in the series, the waits going to be nearly unbearable.