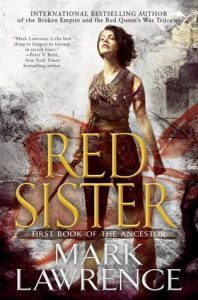 I was born for killing – the gods made me to ruin.

At the Convent of Sweet Mercy young girls are raised to be killers. In a few the old bloods show, gifting talents rarely seen since the tribes beached their ships on Abeth. Sweet Mercy hones its novices’ skills to deadly effect: it takes ten years to educate a Red Sister in the ways of blade and fist.

But even the mistresses of sword and shadow don’t truly understand what they have purchased when Nona Grey is brought to their halls as a bloodstained child of eight, falsely accused of murder: guilty of worse.

Stolen from the shadow of the noose, Nona is sought by powerful enemies, and for good reason. Despite the security and isolation of the convent her secret and violent past will find her out. Beneath a dying sun that shines upon a crumbling empire, Nona Grey must come to terms with her demons and learn to become a deadly assassin if she is to survive…

I’m not really a fan of grimdark fantasy so while I know who Mark Lawrence is, I’ve never read any of his books before this one. Honestly, the only reason I even picked up Red Sister was because a friend of mine has been bugging me to read it for months. I figured if I bought it and read at least the first couple chapters I could tell him it wasn’t really my genre and he would finally leave me alone. I didn’t expect to start reading the first chapter and then have the next thing I’m really aware of being my alarm clock going off at 6AM and telling me it was time to start getting ready for work. Not calling out sick so that I could finish the book was probably one of the toughest things I’ve had to do in awhile.

While I thought this book was freaking fantastic I’m probably going to have to read it again just because I was in such a hurry to find out what was going to happen next that I’m pretty sure I missed out on some important details as I rushed through things. Though one of the things that I think really stood out about Red Sister is that it isn’t a story about some ancient prophecy which is all too common these days and doesn’t feel like it’s a book about someone destined to save the world. To me it seemed like it was just a story about a little girl who had a really fucked up childhood and is trying to to survive through an adulthood that seems like it’s going to be just as screwed up. It’s not like we can blame her as she becomes a brutally efficient killer to do so!

My main issue with this book was how difficult it was for me to understand the magic system. On it’s surface it seems pretty simple but the further into the book I got the harder it was for me to really understand. Though, that could easily be explained by me rushing through the book a bit too fast or me just being a complete idiot.

I would rate Red Sister as one of the better books I’ve read this year and Nona as one of the most interesting main characters I’ve read about in a long time. I’m already looking forward to the next book in the series and can’t wait for April to get here so I can find out what happens next. Until then I’m going to see if I can work up the courage to try Mark Lawrence’s other series, I’m told they are quite a bit darker and bloodier than this one was, which I didn’t think was possible!