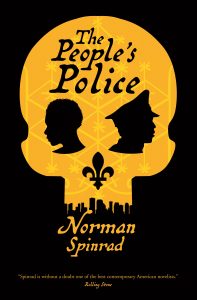 This really isn’t the type of book I typically read, as I tend to avoid books so blatantly political in nature, but I found The People’s Police by Norman Spinrad to be a fast-paced and oddly enjoyable read. I say oddly enjoyable because while this isn’t something I would have gone out to buy myself, I was still unable to put it down once I had started reading it.

The first thing that really comes to mind while I sit here and attempt to write this review is how much I loved the setting of The People’s Police. I’ve always enjoyed reading books set in New Orleans, as I think the city has a fascinating culture and history, and it’s always interesting to see what an author does with such an interesting place or people. I was fairly impressed with Norman Spinrad’s take on the city and its people. He manages to fit quite a bit of detail into the book without bogging down the story at all. Out of all the books I’ve read that were set in New Orleans, which is a surprising amount when I try and count them, I would have to say this is one of my favorites.

The second thing that quickly came to mind is how much I both loved and hated the political aspects of this book. Normally I like to use fantasy as a brief escape from reality and that is all but impossible with The People’s Police. It’s almost scary how easily I can see some version of the political and economic events that take place in this book happening in real life. Norman Spinrad does a great job taking today’s reality and our potential future and putting an almost fantastical twist on it, which is one of the things that makes it such an odd read at times.

Despite the mixed feelings I had throughout the course of this book and the fact that I’ve struggled a little bit writing this review, I really did enjoy reading The People’s Police, which I did do in a single sitting. I would gladly recommend this book to anyone that is looking for something new to read who won’t mind the political nature of it all. I would also take that recommendation one step further and tell anyone who hasn’t read anything by Norman Spinrad to take a look at his other books. He’s a fantastic author and I’ve been a fan of his for a long time now — he’s definitely worth taking a look at whenever you’re looking for something to read!