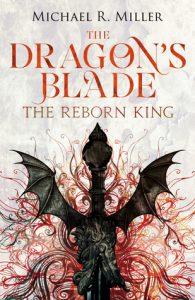 Dragons once soared in the skies, but that was before the Transformation, before they took human form. Now, demonic forces stand to obliterate them. When left mortally wounded, Darnuir, the Prince of Dragons, can only be saved through a dangerous rebirthing spell. He is left as a babe in human hands.

Twenty years later, Darnuir is of age to wield the Dragon’s Blade. As the last member of his bloodline, he is the only one who can. He is plunged into a role he is not prepared for, to lead a people he does not know. Shadowy demons ravage his new home and the alliance between humans, dragons and fairies has fractured.

Time is short, for new threats and deadlier enemies are emerging…

I discovered this books on Goodreads and was considering getting it when I received an email from the author asking me if I’d be interested in reviewing the audiobook for it, so I was pretty excited to read this once I received my copy. I may have had my expectations high but for once that didn’t cause the book to disappoint me at all. The Reborn King: The Dragon’s Blade #1 by Michael R. Miller was a fun and exciting read that was full of as much action and intrigue as you could want from a book. Normally I read a book first and then listen to the audiobook, but since I received the audiobook first I’m already itching to go out and buy the book to see if I can enjoy it as much a second time as I did the first.

While I was pretty excited to start reading this book, the fact that it was about dragons made me a little bit hesitant. There have been a lot of books about dragons that have come out in the last few years and I can’t help but feel a bit of dragon fatigue because of them all. So I was pleasantly surprised when Michael R. Miller put his own unique twist on them that made them interesting to me again. That’s actually one of my favorite things about this book, the way the author takes classic fantasy creatures like dragons, dwarves, and pixies and puts his own unique spin on them. I love when an author takes classic fantasy and turns it completely upside down and inside out.

The only thing that really disappointed me about this book was how forced and contrived I found the romance subplot of this book to be. Normally I enjoy a good bit of romance in whatever I’m reading, but whenever it came up in The Reborn King I wanted to skip to the next chapter to avoid it. I tend to give authors a bit more leeway with these things when it’s their first book or the first book in their series, and considering this is both for Michael R. Miller I’m going to give him the benefit of the doubt here and assume it will flow a bit more naturally in the next book.

Now since I listened to the audiobook for this, I should probably address my feelings on the narrator. I’ve never heard of Dave Cruze before, but for the most part, I thought he did a great job narrating this book. I thought he gave most of the characters their own voice and he enough emotion that he really brought the story to life for me. My only complaint about him would be that I felt the pacing of his narration was a bit off and fluctuated a bit too much for my liking. Though most of my favorite narrators have done this to me a time or two so I don’t think it’s that big a deal in the grand scheme of things and it usually happens less as the series progresses and the narrator gets a better grasp on it.

So I will say once more that aside from a couple small issues I had with it, I really enjoyed this book and will gladly recommend it to anyone looking for something to read, especially if they are looking for a new take on some classic fantasy tropes. I’m already counting down the days until I can get my hands on the next book in the series, I have high hopes for it.