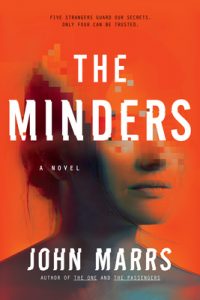 In this electrifying near-future thriller, five strangers guard government secrets, but only four can be trusted.

In the 21st century, information is king. But computers can be hacked and files can be broken into – so a unique government initiative has been born. Five ordinary people have been selected to become Minders – the latest weapon in thwarting cyberterrorism. Transformed by a revolutionary medical procedure, the country’s most classified information has been taken offline and turned into genetic code implanted inside their heads.

Together, the five know every secret – the truth behind every government lie, conspiracy theory and cover up. In return, they’re given the chance to leave their problems behind and a blank slate to start their lives anew.

But not everyone should be trusted, especially when they each have secrets of their own they’ll do anything to protect…

I just recently finished this book and I have to say that I was just blown away by how good it was, and how relevant it feels in the digital age that we live in. I’m sure I’ll write a full review in the upcoming days but I just wanted to put a bit of a spotlight on this book and recommend it to anyone looking for something good to read, and to share a brief Q&A with the author!

I’ve only recently discovered John Marrs but he’s already one of my favorite authors outside of my usual genre of fantasy. I have yet to read a book of his that wasn’t simply fantastic and The Minders is one of his best so far!

A Brief Q&A with John Marrs

Author of The Minders

Can you tell us about The Minders and what inspired you to write this story?

I was caught in an internet rabbit hole when the idea came to me. I can’t remember how I came across it but I stumbled upon a website dedicated to conspiracy theories. Its posters had opinions on absolutely everything, from how Covid came about to the death of JFK and theories that the earth is flat. There were some subjects with perfectly credible theories attached to them and others that were absolutely insane. But they did have me wondering what it would be like to know every one of your country’s secrets but were forbidden to tell anyone. Is that weight of knowledge worth it if you can’t share? I thought it might be the basis of an interesting thriller.

Both The Passengers and The Minders touch on important issues like automation or privacy and information in the digital age. Was it your intention to make people think and talk about these topics?

First and foremost, I want to write books that entertain. Now, more than ever, we want to escape the Covid worlds we are forced to inhabit and novels are always a great form of escapism. My books are set in the near future and a world that we are on the cusp of, so I try to make them identifiable and believable. I hope my readers can put themselves in the positions of the characters and ask themselves what they would do in their situation. And if I can make them think a little about how our new world will be when it comes to subjects like autonomous vehicles, data storage or hacking, then that’s a bonus.


There’s a lot in this novel on things like Privacy, Encryption, or even various conspiracy theories, did you have to do a lot of research before writing it?

Absolutely. I knew nothing about the subjects you mention. So I had to immerse myself as much as I can in these worlds to make the book work. I used the internet, YouTube, and television documentaries to give me enough background for me to write my story. Because if I couldn’t understand what I was trying to convey, then that would come across to the reader. My husband also loves researching subjects like this for me so it was a real joint effort.


Was there any sort of message you were trying to get across with your novel or was there anything you were hoping your readers would take away from it?

As I said earlier, I’d like the reader to ask themselves what they might do in my characters’ situations, what decisions they would make, how they might survive. I’m not trying to force my opinion upon anyone as to the way technology is heading, I just hope that for a few hours, they are entertained and may understand a little more about a subject they didn’t know before they opened one of my books.