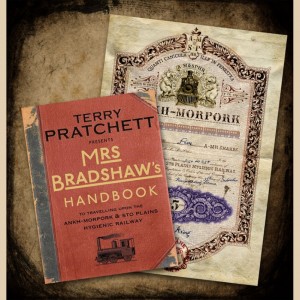 Mrs. Bradshaw’s Handbook offers a view of the Sto Plains like no other

Authorized by Mr. Lipwig of the Ankh-Morpork & Sto Plains Hygienic Railway himself, Mrs. Georgina Bradshaw’s invaluable guide to the destinations and diversions of the railway deserves a place in the luggage of any traveller, or indeed armchair traveller, upon the Disc.

From the twine walk of Great Slack to the souks of Zemphis: edifying sights along the route

Tickering, nostrums and transporting your swamp dragon: essential hints on the practicalities of travel

Elegant resorts and quaint inns: respectable and sanitary lodgings for all species and heights

Pratchett was a boy growing up when steam power was being replaced and England’s iconic steam trains began disappearing, and a certain nostalgia for steam is apparent in his writing. The most recent Discworld novel, Raising Steam, is all about steam power coming to the Disc and the transformation the world underwent as a result. Mrs. Bradshaw’s Handbook is almost an extension of Raising Steam, showing us things that the full novel wasn’t able to. In addition, the handbook fleshes out the Disc in new ways, giving us maps, showing where the various city-states of the Sto Plains sit in relation to each other, and exploring the history of the region. The book is filled with as much wit and humour as any other Discworld book, and has a few in-jokes to delight long-time readers. In a nice spin on how things normally are, Mrs. Bradshaw is an old widow who truly loves the new steam technology, instead of turning her nose up at it and wishing for things the way they were.

I can guess what most of you are thinking. “But ARamone,” you say, “it’s just a travelogue for a fictional place – who would enjoy reading it?” In truth, I think every Discworld fan would enjoy reading it. It helps us orient ourselves in the vast geography of the Discworld. It made me want to travel on the Ankh-Morpork railway and see the sights described. The amount of thought and detail put into the book is truly impressive and speaks to Pratchett’s talent as a writer and world-builder. The simple power of Mrs. Bradshaw’s Handbook is how real it makes the Disc, like we could reach out and touch it, and how it does it just as effectively as the novels with so much less space to do it in. Mrs. Bradshaw’s Handbook has a spot on the shelf of every Discworld lover.