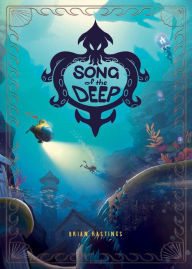 I was a little hesitant to accept a copy of this book to review, I don’t usually read the companion novels to video games. It has been my sad and unfortunate experience that they lack in any real sustenance, what little plot there is, or what few characters there are tend to only be there for a little bit of added publicity. However, the fantastic cover really caught my eye and I knew I had to have it,  and I’m really glad that I did. Brian Hastings has proven to be a great author, and Song of The Deep was a well written and imaginative story that I thoroughly enjoyed from beginning to end.

I think one of the most important things to understand about this book is how the author mentions early one how he wanted to use it to create a heroine who his daughter could look up to, not because of her looks, but because of what she has on the inside. I think with his creation of Merryn that he has done just that. Merryn is one of the most intelligent and capable 12 year old’s I’ve read about. When her father goes missing Merryn doesn’t sit around and cry or worry, nor does she go out looking for somehow to rescue her father. No, she does the one thing that seems most natural to her, she builds her own submarine and sets off on a journey to find and rescue her father herself.

I enjoyed pretty much every aspect of this book. It’s well written, fast paced and has an amazing character who attempts an almost impossible journey using nothing but her courage and wits. However, the one thing I probably enjoyed most about Song of the Deep was the world itself. Brian Hastings has created a beautiful and vibrant world full of fantastical creatures and wondrous creations. While the story may be fast paced and Merryn doesn’t remain in any one area for too long, each and every place she visits is described and illustrated in beautiful detail.

My only real complaint is that I didn’t find the book nearly long enough, but since is a middle-grade story, it’s probably the perfect length. It’s my hope that this becomes more than a single story, I would love to read more about this world and all of its characters. I’ve already read through it twice and I don’t think I could get enough of it if it were to become a series. Though, the one nice thing is that even if this is just a single book, there’s the video game to look forward to. I honestly didn’t have much interest in the game when I first heard about it, but I don’t think I have any choice but to play it now. I can’t wait to see if the game manages to match the pictures I’ve created in my mind.