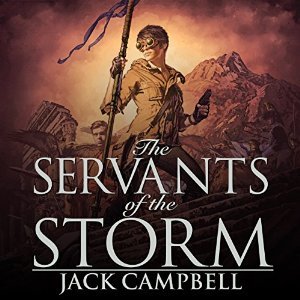 A Storm that will wreck a world threatens Dematr. Only Mari, one of the Mechanics who control all technology through their Guild, has a chance to stop it. She and Mage Alain have survived numerous attempts to kill them and have gained many more followers, but the Storm of chaos, born of centuries of enslavement, grows ever closer.

Mari leads an army now. She and Alain must fight together to bind back the Broken Kingdom and build a force strong enough to defeat the might of the Great Guilds. But the Storm has many Servants who seek to preserve or gain personal power or wealth, or fear the New Day that Mari seeks to bring to the world.

And Mari knows that victory will mean nothing if the precious knowledge brought long ago to their world is destroyed. In order to save it, Alain and Mari will have to pierce through the heart of their enemies’ power and confront once more a place of ancient nightmare.

I don’t know if I can properly describe just how difficult I found the wait for this book to be,  I know I had to have checked the release date at least every other day for the last month, in the hope that I had read it wrong the first 20 times I had done so. The last time I was probably this excited for a book to release was when A Memory of Light release back in 2013. When my audiobook was delivered around midnight, I sat down and told myself I would listen for an hour or so before I went to sleep. I finished it in almost 12 straight hours, I don’t think I’ve ever listened to an audiobook like that before. I can say with complete honesty that The Servants of the Storm by Jack Campbell is one of the best books I’ve ever had the pleasure to listen to.

There are countless reasons why I love this book and series as much as I do, it’s well written and has a great plot and setting, but I will focus on what I think is best about it, and that is the characters. Jack Campbell has proven himself to be a master in my eyes when it comes to creating characters that you fall in love with the first time you meet them, and then over and over again as you learn more about them. While I loved how much The Pirates of the Pacta Servanda expanded on the cast of characters in the series, it’s nice to see The Servants of the Storm narrow them down once more and tell a much more intimate story. Once again we get to follow Alain and Mari as they head into the dead city of Marandur, only this time there is one huge difference. They are not alone. Mechanic Dav, Mage Asha, and Mechanic Captain Banda all must join them if they hope to succeed in their attempt to sneak past imperial forces, secretly infiltrate the forbidden city and make it back out again safely. To do this they will have to rely on, and trust each other completely.

As with the rest of the series The Servants of the Storm has released first as an audiobook, but unlike the rest of the series I could not wait for the ebook to release and so listened to the audiobook first. I will say that Macleod Andrews is a fantastic narrator who gives every character a unique voice and brings the story alive with the emotional depth he puts into every scene that he reads, something I find lacking in a lot of other audiobooks that I listen to. I would definitely now say that anyone who goes to start this series should listen to the audiobooks as you are meant to. I think they are much more enjoyable that way, which is saying something because I absolutely loved to read them.

Right now I probably suggest this series to people more than I do anything else and I would rate it up there alongside books like The Dresdsen Files and the Wheel of Time. Though I would recommend that anyone who starts to read the series start with The Dragons of Dorcastle, the story could be a bit confusing if you were to try and jump into the middle of it. I was pretty upset when I finished the book so quickly, until I realized the next book releases in a month. Now the wait is already starting to drive me crazy, and it’s been just over a day. I don’t know how I’m going to survive it.