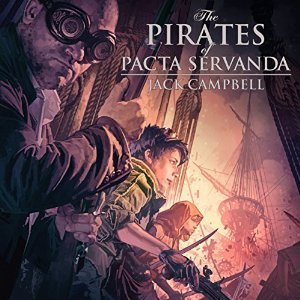 The world feels oddly strained, like a line pulled too taunt and apt to snap, smashing everything in its path.”

Master Mechanic Mari and Mage Alain have survived every attempt to stop them, but their enemies are determined to kill Mari, the only one who can save her world from a storm of destruction. As armies begin to gather and cities seethe with tension, Mari, Alain, and their friends must prepare to confront the storm in the place it first appeared: the broken kingdom of Tiae.

The dangers facing them demand perilous raids, tough battles, and more than a little piracy. Beating the Mechanics Guild and the Mage Guild that have controlled the world of Dematr for centuries will require an unprecedented alliance under Mari’s command of rebellious Mechanics, Mages, and common folk who know that together they can change the world, but separately they will all lose.

I don’t know how I did it, but despite the fact that I’ve been waiting months for the release of The Pirates of the Pacta Servanda, I somehow managed to miss its release. So I was really excited to pick up a copy the other day, Jack Campbell is a great author and his Pillars of Reality series is the perfect mix of steampunk and fantasy. From The Dragons of Dorcastle onward every book has proven to be better than the last, and The Pirates of the Pacta Servanda has done a great job continuing that tradition. I think it is by far the best book in the series so far, and it had me so hooked I almost listened to the entire thing in a single sitting.

There isn’t much I can say about the plot of this book without ruining events that have been three books in coming. Mechanic Marie has finally accepted her role as the Daughter of the Prophecy and with her mage Alain at her side has decided the only way to save the world is to overthrow the Mages Guild and the Mechanics Guild and truly free the people of Dematr. To do so Marie and Alain must gather a following of Commons, Mages, and Mechanics and get them to work together towards the same cause — something that has never been done before in all of recorded history. The Pirates of the Pacta Servanda is where we finally get to see the true beginnings of Marie and Alain’s attempt at revolution.

While I enjoyed pretty much every aspect of this book, like the rest of the series there is one thing that really makes it stand out, and that are its characters. The previous books in the series have focused heavily on Alain and Marie as they grew as characters, both individually and as a couple, but with The Pirates of the Pacta Servanda we get an influx of characters, both new and old who really add something to the story. Marie and Alain each have to really step out on their own as leaders as Mechanics, Mages, and Commons all flock to them as they attempt to change the world.

This is also the first book in the series that I have listened to instead of reading, and MacLeod Andrews does a brilliant job of bringing all of the characters to life. Even the most minor of characters has their own unique voice, and he managed to pack more emotion into the story than most narrators I’ve heard. He did such an amazing job narrating the book that I had to go back and listen to the first three books in the series as well, and for the first time ever I think I enjoyed listening to a book series more than I enjoyed reading it myself. I already can’t wait for the next book in this series to release, and I know I’m going to listen to the audio book first instead of waiting for the ebook of physical copy to release.