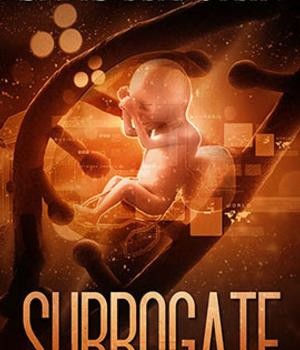 Rebecca Hardwick wants nothing more than to start a family with her husband. But when a series of tragedies occur, she is left unable to have children by natural means.

Jane Nurelle is in an abusive relationship filled with beatings, drinking and drugs. But when she learns of her pregnancy, she is determined to turn her life around, even if it means  resorting to violence.

Through an unlikely series of events, these two women come face-to-face with a notable scientist who has perfected a way for couples to have biologically matched children through the process of human cloning. But his service comes at a price…and the women share more in common than they ever thought possible.

Surrogate is an unforgettable tale of life, love, revenge and maternal instinct

Surrogate is the newest story from Darkfuse’s line of novellas, and the second story by David Bernstein I’ve read so far this year. While this is not the type of story I usually read there were enough supernatural elements to keep me interested the whole way through. I’ve noticed that David Berstein likes to ask thought provoking questions throughout his work that keep you thinking about it well after the story is over. In Surrogate that question is simple–How far would you go to have and protect your child?

Tom and Rebecca Hardwick are trying everything they can to have a child, but when tragedy strikes and Rebecca finds herself unable to conceive they are both left devastated. Rebecca and Tom are soon approached by the secretive Dr. Kotrich and offered one more opportunity at parenthood, an opportunity that comes at a price. This is where the story starts to get a little strange and delves into the ethical questions of human cloning and surrogacy. Tom and Rebecca soon find themselves doing whatever it takes to have and keep their child, no matter what the cost.

Jane Nurelle is a pregnant and battered wife who is unable to bring herself to leave her abusive husband, even if it may cost her the life of herself and her child. These three people soon find their lives more entwined than they would have though possible.

I really wanted to enjoy this story, it has so much going for it that should have made it an amazing story. While I did enjoy it in the beginning it seemed half way through the story the author decided he didn’t know where the story was going to go anymore. The story started jumping around in an almost frenzied fashion which made it difficult for me to follow or really enjoy in the end. That being said it had enough going for it that I found myself reading it in one sitting because I had to know what was going on. Then in the end, while plenty of questions were answered, I found myself still wondering just what was going on.

Surrogate will be released October 14th by Darkfuse.

I received a copy of this book in exchange for an honest review.
I