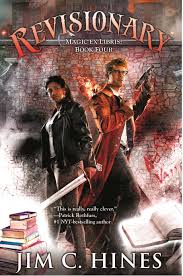 When Isaac Vainio helped to reveal magic to the world, he dreamed of a new millennium of magical prosperity. One year later, things aren’t going quite as he’d hoped. A newly-formed magical organization wants open war with the mundane world. Isaac’s own government is incarcerating “potential supernatural enemies” in prisons and internment camps.

Surrounded by betrayal and political intrigue, Isaac and a ragtag group of allies must evade pursuit both magical and mundane, expose a conspiracy by some of the most powerful people in the world, and find a path to a better future. But the key to victory may lie with Isaac himself, as he struggles to incorporate everything he’s learned into a new, more powerful form of libriomancy.

I think Librarians are amazing people, and I like to think that anyone who has spent a decent amount of time in a library will agree with me. It has been my experience that they have an almost uncanny ability to take the briefest of plot descriptions and tell me exactly what book I’m looking for, and where it’s located — it’s almost magical. With his Magic Ex Libris series, Jim C. Hines has taken that awesome magic to a whole new level. I don’t think I can recommend this series enough, it’s some of the best urban fantasy available on the market today.

I don’t want to say much about the plot for fear of spoilers, but it is safe to say that following the events of the previous book Libriomancer and the revelation to the world that magic is real has thrown the United States and the rest of the world into a panic. Magical organizations across the world are fighting political battles to keep themselves free, a secret shadow war is being fought where the public can’t see it,  and Isaac Vainio is to blame for it all.  The fallout from the previous book is interesting, to say the least.

I probably have more fun while reading the Magic Ex Libris books than I do reading any other urban fantasy series outside of the Dresden Files. I’ve always found it exciting to be reading a book and have it reference or mention another author or series I enjoy, libriomancy takes that awesome to a whole new level. I love the idea of being able to reach into a book and pull out a magical item from that world to use, and with Revisionary, Jim C. Hines chooses some great books for his characters to reach into.

I would recommend this book to just about anyone who reads fantasy or science fiction, it’s well written and full of great characters and an amazing magic system. You will definitely get a kick out of reading about a character from one book using magic or items from another, I sometimes wonder how the author gets away with it. I’m already counting down the days till the announcement and release of the next book in the series.