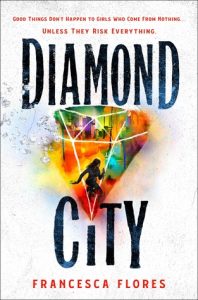 Fierce and ambitious, Aina Solís as sharp as her blade and as mysterious as the blood magic she protects. After the murder of her parents, Aina takes a job as an assassin to survive and finds a new family in those like her: the unwanted and forgotten.

Her boss is brutal and cold, with a questionable sense of morality, but he provides a place for people with nowhere else to go. And makes sure they stay there.

DIAMOND CITY: built by magic, ruled by tyrants, and in desperate need of saving. It is a world full of dark forces and hidden agendas, old rivalries and lethal new enemies.

To claim a future for herself in a world that doesn’t want her to survive, Aina will have to win a game of murder and conspiracy—and risk losing everything.

For me, there isn’t much that I enjoy more than discovering a new book or author that I either haven’t heard of or at least haven’t read before. So I was pretty excited when I received my copy of this book a couple of weeks ago. Diamon City by Francesca Flores was a fun read full of action, political intrigue, and one of the coolest magic systems I’ve read about so far this year. I didn’t realize this was Francesca Flores’s debut novel so I made the mistake of rushing through this thinking if I enjoyed it I would have more books by the author to read when it was over.

I didn’t read much about Diamond City before I started reading it so I really didn’t know what I was getting into when I started, but it only took a couple of paragraphs before I was just completely sucked into the story. Francesca Flores did a fantastic job creating a believable world on the brink of industrialization and change full of memorable characters and a plot that’s easy to follow but complex enough to keep you guessing what was going to happen next. I read Diamon City in a single sitting because every chapter left me wanting to know what was happening next and unable to stop reading until I found out.

While there was so much to enjoy about this book, I think my favorite aspect of it has to be the protagonist Aina Solís. I found her to be such a believable character who was almost too easy to empathize with. I also thought the worldbuilding of Diamon City was pretty damn great. Francesca Flores created a world and city so reminiscent of our world at the moment that it was a little scary at times. Normally I like my books to be more fantastical and less realistic, but the world of Diamon City was just too great to not enjoy.

This is a book I know I’ll definitely be reading a lot of and an author I’ll be sure to follow closely in the future. I would happily recommend this book to everyone I know, I think it has a little bit of something for everyone and I think it will be a great opportunity to get in at the beginning of what is clearly going to be a fantastic series.