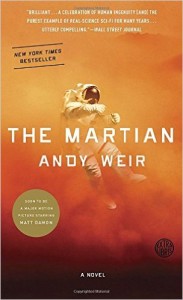 Six days ago, astronaut Mark Watney became one of the first people to walk on Mars.

Now, he’s sure he’ll be the first person to die there.

After a dust storm nearly kills him and forces his crew to evacuate while thinking him dead, Mark finds himself stranded and completely alone with no way to even signal Earth that he’s alive—and even if he could get word out, his supplies would be gone long before a rescue could arrive.

Chances are, though, he won’t have time to starve to death. The damaged machinery, unforgiving environment, or plain-old “human error” are much more likely to kill him first.

But Mark isn’t ready to give up yet. Drawing on his ingenuity, his engineering skills—and a relentless, dogged refusal to quit—he steadfastly confronts one seemingly insurmountable obstacle after the next. Will his resourcefulness be enough to overcome the impossible odds against him?

I don’t really remember the last time I read any science fiction, let alone the last time I enjoyed it. I’ve never really been a fan of the genre. The main reason I accepted the invite to read and review The Martian wass because I happened to catch the trailer for the upcoming movie. I figured that if the preview of the movie was that good, then the book would have to be even better. I was glad to discover I was right, Andy Weir turned out to be a talented author and The Martian an amazing book. I’ve already read it more than once.

Mark Watney has made history, not only has he become one of the very first people to walk on Mars, he has also become the first person to be wounded and abandoned there by his crew as they evacuate the planet and he’s been presumed dead. Now Mark must figure out a way to contact Earth, let them know he is still alive — and hope they are able to return for him. With his supply of food and water dwindling every day, Mark must find a way to survive until help arrives, or figure out a way to help himself if it doesn’t.

I was pleasantly surprised with how much I enjoyed this book, considering I don’t really enjoy the genre. I found Mark Watney to be a likeable character who was easy to empathize with and root for as he struggled not to go crazy from the isolation and to survive. While I don’t know enough about science in general to know how realistic the story is, I did find it easy to suspend my disbelief and follow the story, something that I struggle with sometimes when I read other science fiction books.

In the beginning The Martian is told in an epistolary fashion as Mark narrates his day to day activities in audio and video logs for the next Mar’s mission to find if he is not able to contact NASA or make it home. I found this form of story telling to get a bit old about a quarter of the way through the story, which was perfect, as that was when the author decided to change things up and alternate between Mark’s logs and the key people in NASA as they deal with the fallout of losing an astronaut on Mars.

I would recommend this book to just about everybody, whether they read science fiction or not. I would also suggest anyone who plans on seeing the movie read the book first. I doubt many people will disagree with me when I say the book is usually better!