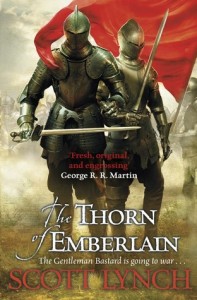 Dear readers and fans of the Gentlemen Bastards—

I’ll lay it out as plainly as I can.

With the utmost regret, we have been compelled to move The Thorn of Emberlain from its expected autumn 2015 release date to a 2016 date. I requested an opportunity to write this note so I could emphasize how little this is the fault of anyone but myself. My publishers around the world have, in fact, held the door open for a length of time that is somewhere between heroic and insane. The fault is mine; the severity of my ongoing anxiety attacks has simply made it impossible to turn the manuscript in and commit to the accelerated production process our original release date would have required.

While this is not the outcome we’d hoped for, we have every expectation that this will ultimately do more good than harm. I will continue to try to keep you more closely informed of Thorn’s progress, and I don’t think it will be long before we’ll be able to announce that the manuscript is secure and the production process has begun. We’re very close.

Although I withdrew from several public appearances in early July on account of those same anxiety issues, I am now fairly confident that I’ll be able to maintain the rest of my planned public appearances for 2015, including WorldCon, World Fantasy, and a few others yet to be announced.

Cheers, and many thanks for your continued patience and support.

I met Scott Lynch earlier this year, and he’s really a fantastic, funny, and charming guy;  our best wishes go out to him in his continuing battle against depression and anxiety. I know you’ll all give him nothing but love and support — I know this is sad news for fans of the Locke Lamora and the Gentlemen Bastards books, but with some time and space I’m sure Scott will be able to bring you the book you’ve been waiting for. I do recommend following him on social media, as he promised above, he’ll be endeavoring to keep everyone informed on how it goes.