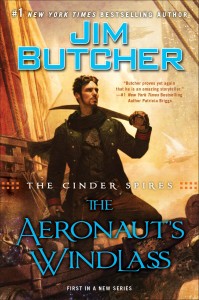 Since time immemorial, the Spires have sheltered humanity, towering for miles over the mist-shrouded surface of the world. Within their halls, aristocratic houses have ruled for generations, developing scientific marvels, fostering trade alliances, and building fleets of airships to keep the peace.

Captain Grimm commands the merchant ship, Predator. Fiercely loyal to Spire Albion, he has taken their side in the cold war with Spire Aurora, disrupting the enemy’s shipping lines by attacking their cargo vessels. But when the Predator is severely damaged in combat, leaving captain and crew grounded, Grimm is offered a proposition from the Spirearch of Albion—to join a team of agents on a vital mission in exchange for fully restoring Predator to its fighting glory.

And even as Grimm undertakes this dangerous task, he will learn that the conflict between the Spires is merely a premonition of things to come. Humanity’s ancient enemy, silent for more than ten thousand years, has begun to stir once more. And death will follow in its wake…

Book! Words! Opinions! (I swear I’m awake, as I write this).

The first book in the Cinderspires series by Jim Butcher, The Aeronaut’s Windlass is a fun and exciting introduction into a new steampunk world.

Take the same dry humor that makes The Dresden Files so loveable, add epic airship battles, talking cats, a grizzled captain and his crew, a brilliant wizard incapable of operating doorknobs, and many other fun and quirky characters, mix them all together, and the end result is The Aeronaut’s Windlass.

When I first heard Butcher speak of this series, back when I interviewed him a couple of years ago, I fell in love with the idea and grew rather unduly excited for it. Hornblower meets League of Extraordinary Gentlemen, with inspiration from Firefly? Count me in.

I was fortunate enough to be a beta-reader for this novel, so my first read-through it was segmented, with over a year separating me starting and finishing this novel. That being said, when I got the finished copy, I read it in nearly one sitting.

It took me a little while to get into The Aeronaut’s Windlass both times that I read it. Many of the characters come off as standoffish, and largely unrelatable at first. However, the story quickly progresses, and by the end, I loved most, if not all, of the main supporting cast, even (if not especially) the ones I was most uncertain about.

The world Butcher has created is a fun one. If you’re looking for a new character-driven adventure, a fast-paced read (though, occasionally a bit too fast), airship warfare, talking cats which act exactly as you’d expect them to, and well-written female protagonists? The Aeronaut’s Windlass is the book for you.