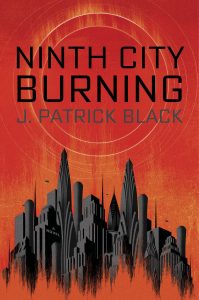 Centuries of war with aliens threaten the future of human civilization on earth in this gripping, epic science fiction debut…

We never saw them coming.

Entire cities disappeared in the blink of an eye, leaving nothing but dust and rubble. When an alien race came to make Earth theirs, they brought with them a weapon we had no way to fight, a universe-altering force known as thelemity. It seemed nothing could stop it—until we discovered we could wield the power too.

Five hundred years later, the Earth is locked in a grinding war of attrition. The talented few capable of bending thelemity to their will are trained in elite military academies, destined for the front lines. Those who refused to support the war have been exiled to the wilds of a ruined Earth.

But the enemy’s tactics are changing, and Earth’s defenders are about to discover this centuries-old war has only just begun. As a terrible new onslaught looms, heroes will rise from unlikely quarters, and fight back.

Sounds good, right? Well, read below! The kind folks at Ace were able to get us a short excerpt, as well as character bios, to share with you:

The Valentine War, Earth 500 Years Ago

It starts with the world how it used to be, with countries and billions of people living everywhere. Back then there was no such thing as thelemity, and people built houses and machines sort of like they have in settlements today, but all of that changed when the Valentines came.

The reason we call them the Valentines is that the day they first attacked, February 14 on the old Western Calendar, was called “Valentine’s Day”. We still don’t know what the Valentines call themselves, because we’ve never been able to talk to them. We don’t even know what they look like. People had all sorts of different names for them early in the war, but “Valentine” is the one that ended up being the most popular. It used to mean something totally different, but not many people remember that now.

We never saw them coming. All at once cities just started disappearing. A city would be there, everything totally normal, and then it would be gone, nothing but rubble and a cloud of dust. By the time we figured out we were under attack, half the cities in the world had already been destroyed. We tried to fight back, but the Valentines had thelemity, and our strongest weapons were next to useless. They probably would have killed every single person on the planet, except for one thing: It turned out we could use thelemity too.

JAX: A cadet at the Academy and the youngest fontanus in Ninth City. With the ability to harness thelemity, Jax must stand for all citizens during Valentine attacks and act as the only defense between the city and complete destruction.

NAOMI: The youngest sister in the Ochre family, and a member of the nomadic Walker tribe. Naomi longs to be a scout like her older sister, Rae, but her undiscovered gifts will take her down a different path, far away from the life she knows.

RAE: The beautiful, impulsive leader of the Ochre family and a scout for the Walker tribe. Rae’s penchant for bravery and lack of fear plunge her into a new world, where her strength will be tested in ways she never imagined.

TORRO: A factory worker in Settlement 225, which provides supplies and soldiers to the Legion’s war effort. Torro’s uncomplicated life is suddenly disrupted when he finds himself drafted as cannon fodder and shipped away to the horror of the front lines.

VINNEAS: Procurator of the Academy, responsible for every cadet at the school of Grammar and Rhetoric. Part of being Procurator is being prepared for command in combat, but an unwelcome promotion sends him to active duty sooner than he expects.

IMWAY: The top ranked warrior in the Equites Aspirant, the most elite fighting unit in the Academy. Highly skilled in combat, Imway’s power stems from a suit of armor called ‘equus’ and the ego that comes with it stands the chance of ruining any relationship he has.

KIZABEL: The most sought after Artifex—a creator of artifices—at the Academy. Her most recent project violates many rules, and Kizabel faces expulsion or incarceration if caught. But her project will revolutionize equus design, if she can only get it running.

Together, this unlikely group of allies will face a mysterious enemy and a war that has brought their world to the brink of destruction.

Ninth City Burning by J. Patrick Black is set to be released September 6th 2016. You can preorder it here on Amazon.

We’ll be reviewing it closer to the release date, so be sure to check back!