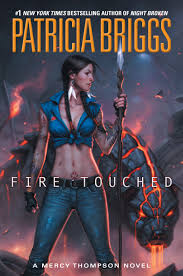 I’ve been a huge fan of Patricia Briggs since the day I first picked up one of her books, and I think her Mercy Thompson books really stand out when compared to most of the urban fantasy on the market today. I’m glad I can say her newest book Fire Touched is no exception, in fact, I would probably say it’s one of the better books in the entire series. While the earlier books can be a bit slow to build up, Fire Touched was an exciting read, full of faced-paced action and intense emotion that almost left my mind reeling with how real it felt at times.

One of my favorite things about the book is that it addressed the only real issue I’ve had with the series for the last book or two, and that is the lack of any new characters or the fact that, as good as they are they barely moved the series forward. In Fire Touched we get are introduced to an interesting new werewolf who I’m convinced is going to have an important role to play in the future of the series, though I won’t spoil anything by saying why! We also get introduced to a decent number of new fae who have set themselves against Mercy, Adam, and the rest of the Pack. I think we are going to be seeing the repercussions from the events of Fire Touched for the next few books in the series.

I enjoyed this book enough that I went out soon after I finished it and bought the audiobook so that I could experience it a second time in a different way. I have to say that while I may not have liked the narrator for the Mercy Thompson series for the first couple books, she has improved drastically in Fire Touched. In Moon Called I found the accents and voices of the characters to be too similar at times and got confused a time or two as to who was speaking. With Fire Touched I’ve noticed all the characters of unique voices of their own, even if some of the accents have changed a little bit from the previous books.

I think fans of the series will enjoy this book as much as I did, it’s a really fun story that movies the series forward quite a bit. And while I think any urban fantasy fans who haven’t read the series yet will enjoy it, I would say it’s too confusing to start with Fire Touched and would suggest that anyone new to the series starts with Moon Called so they aren’t too confused.