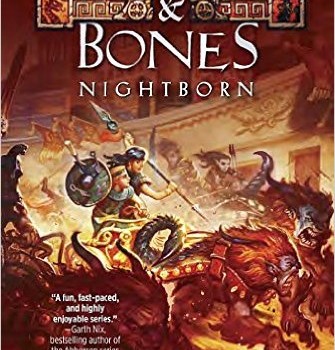 First to a Castle in the Briars,
Where end all of life’s desires.
Over Oak and under Corn.
There to seek the soundless Horn.

Last year, Lou Anders released his first middle-grade novel, Frostborn about a young boy who forms an unlikely friendship with a half frost giantess as they embark on an adventure to retrieve a powerful magical artifact. Nightborn is the second book in that series. Rumors of a second artifact have surfaced.

Karn isn’t a hero. In spite of recent events, he is a farmer and a trader. He wants nothing more than to learn to manage his father’s farm in Norrenøngard, a land on the very edge of civilization, or beyond it, depending on who you ask. Karn was in the middle of trading when he is scooped into the air by a wyvern and brought before the great dragon Orm, whom Karn had encountered in his previous adventure. The dragon informs him of a new artifact. Karn has no wish to go until Orm reveals that Karn was his second choice. His first, the half giantess Thianna has already gone on the quest and has disappeared. Though adventure and glory don’t temp Karn, the life of is best friend is of great concern, and he departs to lands far from home, following the trail Thianna took. Others are on that trail too, however, including Destra, a dark elf who has been given one more chance to prove herself by helping to retrieve the artifact for her people who want to use it to found an empire of their own. In the midst of secrets and wars, the line between friend an enemy begins to blur, and Karn doesn’t know who he can trust.

Lou Anders draws the reader into the story, immersing you into a rich world full of magic and wonder. The second volume in the Throne and Bones series, Nightborn explores the world beyond Norrenøngard with cultures drawing inspiration from many real life peoples from the ancient word. The friendship between Karn and Thianna endears the reader, and the conflicted Destra adds new levels to the story.

The only real complaint I had was the antagonist Tanthal who I felt was a bit too heavy handed to have risen so high. He felt more like a thug than an officer in an elite dark elf organization. In spite of that, Lou Anders has created a marvelous world and a fantastic story. I’m eagerly awaiting the next volume in the Throne and Bones series.