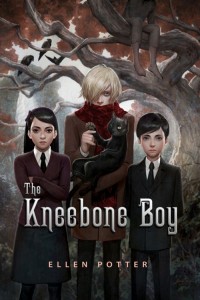 “Some say he’s part animal, covered with hair, with claws for hands and ears like a bats. When his mother first laid eyes on him she fainted dead away…”

Life in a small town isn’t any fun for the Hardscrabble children; their father is always leaving them home while he travels and people in town avoid them for being peculiar. When their father inadvertently sends them to London to stay with an aunt who’s away on holiday in Germany, the children are presented with a rare opportunity for adventure — all by themselves. The streets of London are fascinating, but not so great for sleeping. So the Hardscrabbles make their way to another small town — but this one has a mystery. Legend has it, there’s a monstrous creature roaming the woods, half boy and half animal. Surely such nonsense couldn’t possibly be true, could it?

Some books are filled with so many mysteries you need to keep reading them just to find out the answers to them. So many questions have been asked, and the answers have been left so late, all you can think is, “The ending better answer all this.”

In that respect, the first 90% of The Kneebone Boy is actually pretty good. Potter gives us just enough information to make us wonder without giving us so much information that we figure it out. By the third-to-last chapter I was left half mad trying to figure out how the story would resolve itself. But we’ll leave that until a bit later.

Besides the maddening questions, the majority of the book was not bad. I found the writing somewhat condescending at times, and the rest of the time it wasn’t particularly gripping; I mostly kept reading to find out if my theories were correct. I didn’t get too attached to any of the characters; Lucia in particular wasn’t very likeable, though the book kept buttering her up. Neither of these things was overly annoying, though, so I was able to get through the book without really minding them.

So; I said the first 90% of the book was likeable, but what about the last two chapters? It’ll be hard to explain exactly what I thought about this without giving spoilers, but I’ll give it my best shot.

I was actually a bit let down by the resolution.

It wasn’t just that the ending wasn’t what I expected (the ending of the third Harry Potter book, for example, was quite unexpected, yet was very good), or that none of my predictions were correct (I’m never right about the murderer in the Cadfael books, for example, but I still love them); it was that the ending didn’t fit; that it wasn’t foreshadowed at all; that it answered so little of the mystery put into the rest of the book.

Potter isn’t shy about the fact that she didn’t plan the ending at all, and it shows. It would have been a lovely twist if it had been foreshadowed properly, but everything pointed in another direction, and as a result the final chapter comes entirely out of left field. If a book’s written well enough, this works, but that’s not the case with The Kneebone Boy. The ending left me feeling unsatisfied, like I’d started reading a very different book instead, and left me with more questions than it did answers. Most of the plot threads are left dangling because they weren’t edited out of the book once Potter settled on an ending, which makes a lot of the book entirely unnecessary; you could read the first seven chapters and the last two and still get the story while completely skipping the middle, and you’d probably be better off for it because you wouldn’t be left with a lot of dangling threads and unanswered questions. I could sense a whole potential untold story, perhaps two, lurking behind the ending we were given, but as the plot threads they were based off of were left twisting in the wind, we’ll probably never hear them. I still feel incomplete thinking about that ending.

Overall, what do I think about the book? I liked most of it and would rather not ponder the ending too much. This book was prevented from being really enjoyable by a lack of revision; one final run-through after the ending had been decided to remove the questions that weren’t going to be resolved, and the twist would have been a good one. I have no problem with people who don’t plan their stories and come up with them on the fly, but remember, readers: read the whole thing over afterwards and remove those bits that don’t fit. Your story will be better for it.