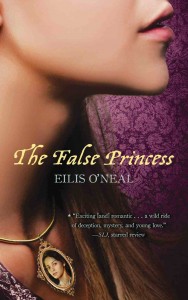 Princess Nalia has just turned sixteen. Her royal world is about to be turned upside down.

All her life, Nalia has believed that she is the heir to the throne of Thorvaldor until her parents, the king and queen, inform her that she is nothing more than a stand-in for their real daughter, the real princess, who has been hidden away for protection until now. Cast out with little more than the clothes on her back, the girl now called Sinda must leave behind the city, her best friend, Kiernan, and the only life she’s ever known.

Sent to live with her only surviving relative, Sinda proves inept at even the simplest tasks. But when she discovers that long-suppressed, dangerous magic runs through her veins, she knows she can never be just a simple village girl.

Sinda returns tot he city to seek answers. There, she finds the boy who refused to forsake her. Together they uncover a secret so shocking it could change the course of Thorvaldor’s history forever. But how far will Sinda go to save the kingdom that betrayed her?

The False Princess was a fairly light read, helped along by the fact that, though the first half of the book goes slowly to set up the second half, it was still quite interesting reading. The plot takes its time moving forward so that the reader doesn’t have to sit through any overly long infodumps, and though the story came close to meandering sometimes, it picked up again quickly.

The characterisation was done fairly well, and O’Neal was good at making us sympathise with her characters. I had a good idea of what Sinda was feeling at all times, and the feelings of the other characters were typically shown without being made too obvious. That said, we were constantly exposed to Sinda agonising over things she had already agonised over, and while the same topic would typically only come up two or three times, it would come up for a page or more and wouldn’t add any new information the next time it came around. While this does help show that she was worrying about some things, which is a perfectly normal thing for a girl in her situation to do, it did get a bit boring to read compared to the more exciting bits. There was a bit too much metaphor in it for me; just about every time Sinda felt an emotion, she used a metaphor to describe it, which, though it got the point across and made more clear what she was experiencing, got a bit old fast. To the book’s credit, however, just about every character was likeable, or at least had different sides to them. I quite liked Mika in particular, and wish we could have seen more of her. O’Neal was good about using dialogue to differentiate characters and it was easy to get a sense for who a character was based on how they spoke.

One thing Sinda mused on quite a bit was her love life. She thought about it regularly and agonised over it a lot in the second half of the book, which wouldn’t be quite so bad if it didn’t seem that at some points she was upset that she possibly got her not-quite-boyfriend mad at her while she was trying to save the kingdom and then wondered if it was worth losing him over. While it made some sense for her situation — having been abandoned by everything she thought she knew, Sinda started clinging to things that gave her a sense of identity — it still left me wondering when the novel was going to get back on course. I can forgive this because it’s normal for sixteen-year-olds to be lovesick, and because it never got anywhere near as bad as Twilight.

A general theme going through the book is of the gap between the rich and the poor, and how unaware of that gap the rich are. This was handled fairly well, and served to characterise Sinda more. It was absent for much of the middle of the book, but came back again towards the end, when it was discussed relatively seriously. It wasn’t covered in as much detail as I would have liked, as it’s a fairly important debate in the context of the story. Still, I’m happy it was mentioned; it seems like a lot of fiction fails to cover the differences between social classes adequately, if at all. Sinda’s reasoning for opposing the book’s villain didn’t come off quite as convincingly in comparison to the villain’s reasoning (which is annoying, because I actually sympathised with Sinda’s point of view on it, thanks to O’Neal’s storytelling), but it made some sense in regards to her situation as well, and tied in with the themes of the rich/poor gap mentioned above (again, though, not in quite as much detail as I would have liked). The ending revisited the theme and dealt with it in a way that hinted at positive changes in the future.

One area where O’Neal really excelled was in her world-building. Thorvaldor had its own history, which played into the story quite well, and important rituals. It had eccentric characters and different cultures which were viewed differently by the different characters. It did seem like a real kingdom, which made the quest to save it that much more urgent and helped us sympathise more with their quest.

I was pleasantly surprised by the book and found I quite enjoyed reading it. I’d recommend it especially to any fans of Princess Academy, who would be sure to enjoy it.