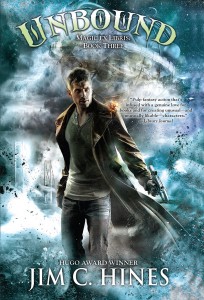 For five hundred years, the Porters have concealed the existence of magic from the world. Now, old enemies have revealed the Porters’ secrets, and an even greater threat lurks in the  shadows. The would-be queen Meridiana, banished for a thousand years, has returned in the body of a girl named Jeneta Aboderin. She seeks an artifact created by Pope Sylvester II, a bronze prison that would grant her the power to command an army of the dead.

Unbound by Jim C. Hines, is without a doubt one of the most entertaining books I have read so far this year.

There is nothing more I enjoy more than books, whether its reading them, collecting them , or gifting them to friends. So to find a book where the main character’s love and obsession with the same books as myself is always cool. Then to see that same character reach into one of my favorite books and pull out an item from that world to defend himself or his friends and you have something that I found to be truly amazing.

Out of every magic system I’ve ever read about, only Unbound and the Magic Ex Libris series has one that I wish really existed– Libriomancy. Lets be honest, what book lover wouldn’t want to be a Libriomancer? The basic idea behind Libriomancy is that mass reading and/or belief in a book allows specially gifted people to reach into a book and bring a part of its world into ours. If you needed to sneak into some place unseen you may reach into Harry Potter and pull out an Invisiblity cloak, or if you needed a translator in a hurry you’d reach into a Hitchhikers Guide to the Galaxy and pull out your very own Babel Fish. Hines even manages to lay down some basic rules for who or what can be pulled from a book, to keep such powerful artifacts like the One Ring from existing.

Aside from the magic system that I honestly couldn’t find any more fascinating, Unbound is just really interesting story wise. Former Porter and recently depowered Libriomancer Isaac Vainio has not been having a very good month. Not only has he been stripped of his position and power by Johanness Guttenberg, the leader of the Porters, but his young ward Jeneta Aboderin has been possessed by the an ancient sorceress hell bent on destroying the world.

Isaac is determined to save his Jeneta and the world both, and he doesn’t care who he has to cross among the Porters or the worlds supernatural community to do so. Without his powers Isaac is going to have to immerse himself in the world of black-magic and hope he doesn’t kill himself or his loved ones in the process. With his loyal fire-spider Smudge on his shoulder, his girlfriend the dryad warrior Lena Greenwood , and her girlfriend the former porter psychiatrist Nidhi Shah at his side, Isaac will attempt to do the impossible.

Out of everyone I know who reads, there really isn’t anyone I wouldn’t be willing to recommend this book to. There is just something really fun about seeing the main character from one book you enjoy, reaching into another and pulling a piece of it out. It’s also not just fantasy that Unbound or the Magic Ex Libris series references, it touches on every genre, so there is something for every body in the book.

While I think anyone will enjoy this book as much as I do, I would suggest anyone who hasn’t done so read the first two books in the series first– Libriomancer and Codex Born.

If you’d like to give it a listen, check out the audiobook preview of Unbound below, courtesy of Audible.