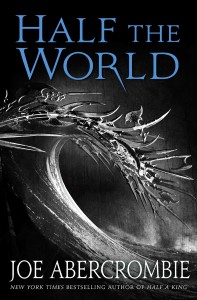 Sometimes a girl is touched by Mother War.
Thorn is such a girl. Desperate to avenge her dead father, she lives to fight. But she has been named a murderer by the very man who trained her to kill.
Sometimes a woman becomes a warrior.
She finds herself caught up in the schemes of Father Yarvi, Gettland’s deeply cunning minister. Crossing half the world to find allies against the ruthless High King, she learns harsh
lessons of blood and deceit.
Sometimes a warrior becomes a weapon.
Beside her on the journey is Brand, a young warrior who hates to kill, a failure in his eyes and hers, but with one chance at redemption.
And weapons are made for one purpose.
Will Thorn forever be a pawn in the hands of the powerful, or can she carve her own path?

Half the World is the second book in Joe Abercrombies new Shattered Sea fantasy series. Set three years after the events of the first book in the series, Half the World follows two new characters as they struggle to survive the harsh lifestyle and political turmoil of the kingdom of Gettland.

Thorn Bathu wants nothing more than to be the greatest warrior Gettland has ever seen while avenging the death of her father. But being a warrior is not an easy thing to do on along the Shattered Sea when you are a girl. Brand is as strong as two men and is almost as good as Thorn with a sword, but he does not believe steel is always the answer, and has what the warrior see as the unmanly habit of seeking peace.

A tragic accident during Thorn’s final training session before she stands before her king and takes the warriors oath finds Thorn labeled a murderer and jailed to await execution by those who trained her. When Brand goes to Father Yarvi to tell him the true version of the events that lead to Thorns imprisonment he to finds himself unjustly accused by his trainers an denied his place as a warrior. Thorn and Brand soon find themselves thrown together as they follow Father Yarvi across half the world in search of redemption for themselves, and possible salvation for the Gettland and its people.

I enjoyed this story much more than I did the first book in the series, and I think the reason for that is the characters. In Half a King I found Yarvi and his group of misfits to be a rather unlikable lot, and struggled to really finish the story. That is not the case for Half the World, I loved the characters of Thorn and Brand and found their slowly budding friendship to be the backbone of the entire story.

The only thing I wish we had seen more of was the magic that exists in the world. In Half a King we get a glimpse of the elven ruins, but learn very little of where they came from or what their purpose was. While Half the World does a good job of keeping up this tradition, it does at least introduce us to the artifacts and the brutal blood magic that can be learned from there. I honestly found myself a bit queasy after the first scene in which the magic was introduced.

This is definitely a book you want to read if your a fan of Joe Abercrombie, or of coming of age stories, or if your just a fan of a really good fantasy story. I made the mistake again of starting my read when I had to work early the next morning, and found myself going to work with no sleep at all. It was well worth it.

This book was provided to me free for an honest review.

Half the World by Joe Abercrombie is set to be released on Feb 17 2015 by Del Rey.