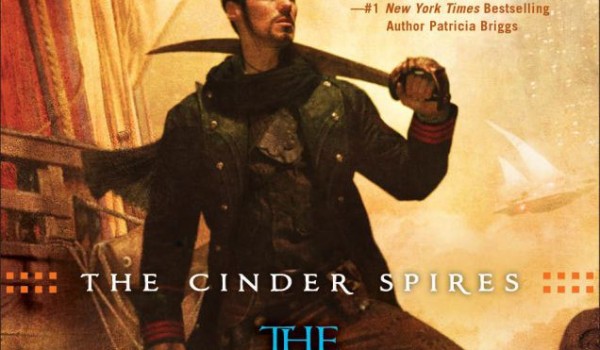 Continuing with yesterday’s post (Best Books of 2014), here are the books we’re looking forward to the most in 2015. Descriptions, release dates, and covers have been added where possible. 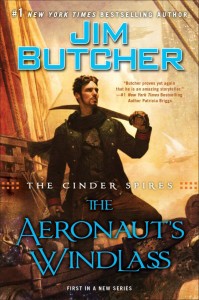 The Cinder Spires is set in a world “of black spires that tower for miles over a mist-shrouded surface” and follows a war between two of the Spires: Spire Albion and Spire Aurora.

It’s League of Extraordinary Gentlemen meets Sherlock meets Hornblower. There are goggles and airships and steam power and bizarre crystal technology and talking cats, who are horrid little bullies. – From Goodreads

I’m not 100 percent positive that this book will be published in 2015, but I really hope it is. Jim Butcher is one of my favorite authors, and if anyone can pull off a great Steampunk novel, he can.

Fool’s Quest (Fits and the Fool #2) by Robin Hobb:

This will be the continuation of Hobb’s the Fitz and the Fool trilogy, and I find myself checking daily to see if any more information has been released about it. I can’t wait to find out what happens after the events of Fool’s Assassin. Fitzchivalry Farseer never seems to catch a break.

Mercenary Kate Daniels and her Mate, former Beast Lord Curran Lennart, have broken with Pack, but Curran misses challenges of leading, so he grabs when Pack offers him its stake in the Mercenary Guild. As a veteran merc, Kate can take over Guild’s unfinished jobs, not knowing they are connected. An old enemy has arisen. – Goodreads

The Kate Daniels series is another Urban Fantasy series I’ve discovered in the last few months that I burned through in just a couple days. The name Magic Shifts sounds like it will describe this next book perfect, everything is starting to change for Kate and Curran.

Beware the dawning of a new mage…

Wydrin of Crosshaven, Sir Sebastian and Lord Aaron Frith are experienced in the perils of stirring up the old gods. They are also familiar with defeating them, and the heroes of Baneswatch are now enjoying the perks of suddenly being very much in demand for their services.

When a job comes up in the distant city of Skaldshollow, it looks like easy coin – retrieve a stolen item, admire the views, get paid. But in a place twisted and haunted by ancient magic, with the most infamous mage of them all, Joah Demonsworn, making a reappearance, our heroes soon find themselves threatened by enemies on all sides, old and new. And in the frozen mountains, the stones are walking… – Goodreads

I don’t think this series has a publisher in the US yet, so I’m probably going to have to convince one of my friends across the pond to send me a copy. I enjoyed the first one enough that I’m willing to pay international shipping just to get my copy of it.

I’m going to start by saying that I’ve already read a majority of these. That being said, I am most definitely looking forward to their releases so that I can (finally) discuss them with others. I will keep everything spoiler-free.

Half the World (Shattered Sea #2) by Joe Abercrombie

Sometimes a girl is touched by Mother War.
Thorn is such a girl. Desperate to avenge her dead father, she lives to fight. But she has been named a murderer by the very man who trained her to kill.
Sometimes a woman becomes a warrior.
She finds herself caught up in the schemes of Father Yarvi, Gettland’s deeply cunning minister. Crossing half the world to find allies against the ruthless High King, she learns harsh lessons of blood and deceit.
Sometimes a warrior becomes a weapon.
Beside her on the journey is Brand, a young warrior who hates to kill, a failure in his eyes and hers, but with one chance at redemption.
And weapons are made for one purpose.
Will Thorn forever be a pawn in the hands of the powerful, or can she carve her own path?

I was fairly indifferent toward the first novel, Half a King, it was a good read, but not fantastic. I didn’t have any feelings for the characters one way or another.

That being said. I greatly enjoyed Half the World, and had it been released this year, it would have undoubtedly been near the top of my favourite reads of this year. The world just seems to come to life, and the characters — while some aren’t what I’d call likable, are at least interesting to read.

The conspiracy to destroy the ruling family of the Annurian Empire is far from over.

Having learned the identity of her father’s assassin, Adare flees the Dawn Palace in search of allies to challenge the coup against her family. Few trust her, but when she is believed to be touched by Intarra, patron goddess of the empire, the people rally to help her retake the capital city. As armies prepare to clash, the threat of invasion from barbarian hordes compels the rival forces to unite against their common enemy. Unknown to Adare, her brother Valyn, renegade member of the empire’s most elite fighting force, has allied with the invading nomads. The terrible choices each of them has made may make war between them inevitable.

Between Valyn and Adare is their brother Kaden, rightful heir to the Unhewn Throne, who has infiltrated the Annurian capital with the help of two strange companions. The knowledge they possess of the secret history that shapes these events could save Annur or destroy it.

I was first introduced to Brian Staveley’s writing in Neverland’s Library, an anthology that came out earlier this year. I’ve been a fan of his writing since then. The Emperor Blade, the first book in the series, and his debut novel, was a strong start. I’m looking forward to reading the continuation of Adare’s, Valyn’s, and Kaden’s stories, and learning more about the Annurian Empire.

The Dread Wyrm (The Traitor Son Cycle #3) by Miles Cameron

Formerly named Tournament of Fools, The Dread Wyrm is the third book in the Red Knight series by Miles (Christian) Cameron. I’ve been looking forward to this ever since I finished reading The Fell Sword in late 2013.

Coin is their master, and their trade, more often than not, is blood. Something about these nefarious types appeals to the fantasy reader. Perhaps it is that they have abandoned the moral set that dictates what is socially acceptable in our world. In these tales, we live vicariously, intrepidly, and by our blades or our wits or a culmination of both to some degree. These are BLACKGUARDS.

If you haven’t heard of this one, I strongly recommend taking a look at their Kickstarter. They have amassed an incredible lineup, and I’m sure that it’s going to be a great anthology. I love the idea of the theme, I have friends in the anthology, and some of my favourite authors are in there as well.

As well, a story I wrote will be in Blacklist, To Steal the Moon, which is my first short story sale.

Perhaps not 100% fitting, but this is something I’ve been looking forward to for a while. Back in 2012, around 500 German fairy tales were discovered. Penguin Classics is putting out The Turnip Princess and Other Newly Discovered Fairy Tales in 2015, which contains over 70 of these, translated into English. I’m hoping that we’ll eventually get some nice hardcover editions of these, however, it currently looks as though they’re only releasing it in paperback.

I don’t have too much to say about this one, mostly out of fear of giving spoilers… but after the ending of book 3, The Daylight War, I’ve been highly anticipating this novel. Peter V. Brett is an exceptional author, and I’m positive this will be a strong addition to the series.

There are at least a dozen others, but I figured I would both keep this short, and keep my repeats of what my co-bloggers have mentioned to a minimum.

I loved his short story in Neverland’s Library and his novella Eyes Deep, so I’m looking forward to this gritty dark fantasy novel.

“Wreathed in the ashes of betrayal, forced to come of age in the dungeons of her stolen inheritance, Kallie Brynn Soren died so that Dirge might be born.

In the midst of an undead invasion, Kallie is gifted the powers of the dying priest who rescued her, his last wish for her to use them against the Necrolords in a way his faith would not allow. Free of the priest’s conscience, she is more than happy to do so. But when fate brings her into the employ of the emperor, the same man whose machinations murdered her father, the opportunity for revenge becomes too much to ignore.

Torn between vengeance and the need to protect the only people she dare call family, Dirge learns there is a much deeper purpose to the Necrolord’s advance; one that might destroy everyone should it come to light.”

The final book in his GnomeSaga trilogy, but probably not the last of the stories involving Nikselpik Nur, gnome wizard.  This has been fun series to read.

“Who will perish when gods and goddesses play their destructive games?

The shadow has been lifted, revealing an insidious enemy. And now Hightower’s gnomish army rides out to meet the threat; yet, before he can join his brethren in the fight, wizard-turned-necromancer, Nikselpik Nur, must purge his archenemy, Raulnock, from the guts of Hightower’s sewers. Will Nik survive a final showdown with the most powerful wizard in Hightower’s history?

Elsewhere, Nik’s sister, Niksabella, must perfect her recursive mirror in order to command a race of stonekin warriors — who may eventually betray her — even as she struggles against an unyielding goddess for control of her own body and mind. Will Nika and her newfound army join the battle in time to save her city and blunt the deadly incursion into sullenor? Only through a master tinkerer’s determination and skill can she overcome the odds and become the Cogweaver.”

Funded by Kickstarter and including stories by Mark Lawrence (The Broken Empire) and Michael J. Sullivan (The Riyiria Chronicles), this anthology is all about our favorite rogues, assassins, thieves and other assorted anti-heroes. Waiting is such torture!

Temporally Out of Order edited by Joshua B. Palmatier and Patricia Bray

Another Kickstarter anthology by Palmatier and Bray, but this time the theme is “time machines that are Out of Order.”  This was inspired by a misspelled sign seen by Palmatier.  Included are stories by Gini Koch, David B. Coe, Laura Resnick, Seanan McGuire, Laura Anne Gilman, Faith Hunter and Stephen Leigh.

The eleventh installment in her Kitty Katt-Martini series. I will probably take Release Day off so I can read and fan girl.

Threading the Needle by Joshua Palmatier

The second installment in the Erenthrall series.  Can’t wait to see what happens next.

The follow-up to Damorán, his series that’s like Supernatural, insofar as they’re both about people who hunt demons.  However, the weapons these demon hunters use bond with their users and have special powers they share with their users.  Intriguing premise, and I’m really looking forward to this book.

A Red-Rose Chain by Seanan McGuire

The next in the Toby Daye series.

Naomi Novik has proved herself to be a highly competent author with her phenomenally-successful Temeraire series, and Uprooted promises to be no different. Available previews show a fleshed-out world and realistic characters, things that made the Temeraire books as good as they are. Coming May 19th, this book is definitely going to be a hit with fans.

Neil Gaiman’s short stories are always delightfully creepy, and Trigger Warning looks to be no different, if the title is any indication. Available February 3rd, fans of Neil Gaiman are not going to want to pass this up.