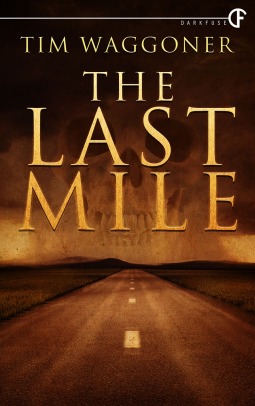 All Dan wanted was to be a good husband and father, to provide for his wife and daughter, to keep them fed, warm, and safe. But then the malevolent godlike beings called the Masters arrived, and their darkness spread across the world, reshaping it into a twisted realm of savagery and madness. In exchange for his family’s protection, Dan now serves one of these alien gods, obtaining human sacrifices to feed his Master’s eternal hunger.

Like so many people since the world changed, Alice has had to do unspeakable things to survive. Unfortunately for her, she’s Dan’s choice for his next sacrifice. Now Dan drives along the shattered remnants of an old-world highway, headed for his Master’s lair, Alice bound hand and foot in the backseat of his car. Dan may not like what he’s become, but he’ll do whatever it takes to protect his loved ones. Alice doesn’t intend to relinquish her life so easily, though, and she plans to escape, no matter the cost.

But in the World After, everything—animals, plants, even the land itself—has become a predator, and the journey to the Master’s lair is an almost guaranteed suicide run. But Dan won’t give up, and he won’t stop fighting. Not until he makes it through the Last Mile.

While this isn’t the type of story i normally read, (I tend to avoid end-of-time stories), but with The Last Mile Tim Waggoner has put an interesting twist on the genre. Instead of a devastating natural disaster, or something like a nuclear war triggering the end of civilization, we have the arrival of the Masters. In the World After nature itself seems to have turned on humanity, forcing those who have survived to live in hiding among the ruins of their once great cities, and allowing the Masters to subjugate them further. Dan is a man who has been branded as a thrall by one of the Masters, and in return for his service his family is given some semblance of safety and civilization. All that Dan has to do to keep his family safe is go out and bring back fresh sacrifices for his Master, the Last Mile is the story of one such trip.

Despite what I thought was an interesting plot concept for a dystopian world, I really didn’t enjoy this story all that much. The major focus of The Last Mile seems to be on the characters and not the plot or setting, and I really didn’t find the characters enjoyable at all. There was very little for me to sympathize with in Dan, I found his flash back scenes particularly difficult to get through, there was just too much gratuitous sexual violence. Alice was a little more enjoyable of a character for me, but not by much, some of her choices in the flash back scenes left me scratching my head.

Despite that, I am still looking forward to the rest of Dark Fuse’s releases for September, and I would suggest anyone who hasn’t done so should check out their novella line, or any of Tim Waggoner’s other books and stories.

The Last Mile is set to be published on October 21st by Dark Fuse.