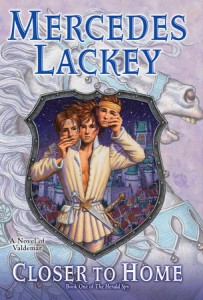 Mags was once an enslaved orphan living a harsh life in the mines, until the King’s Own Herald discovered his talent and trained him as a spyt. Now a Herald in his own right, at the newly established Heralds’ Collegium, Mags has found a supportive family, including his Companion Dallen.

Although normally a Herald in his first year of Whites would be sent off on circuit, Mags is needed close to home for his abilities as a spy and his powerful Mindspeech gift. There is a  secret, treacherous plot within the royal court to destroy the Heralds. The situation becomes dire after the life of Mags’ mentor, King’s Own Nikolas, is imperiled. His daughter Amily is chosen as the new King’s Own, a complicated and dangerous job that is made more so by this perilous time. Can Mags and Amily save the court, the Heralds, and the Collegium itself?

Whenever I pick up one of Mercedes Lackeys new Heralds of Valdemar books I momentarily find myself back at the Spring Valley Library in Las Vegas back before I was the reader I am today. I always catch myself wondering if I would still have this almost all consuming love of fantasy if the librarian there hadn’t handed me my first copy of Arrows of the Queen. There was something about the series that really grabbed my attention and refused to let it go, and to this day there is nothing I look forward to more than the next Mercedes Lackey book release. The Heralds of Valdemar books set the standard by which I have judged every other author and book that I have in the last fourteen years.

While my love of these books is very clear, It is not too difficult to explain the beginning of almost any of Misty’s Valdemar books, they tend to all follow a similar format to start out with. You take an abused or socially stunted outcast and have them Chosen by one of the magical Companions of Valdemar and follow them through their early days of schooling where they quickly discover a dangerous plot that they are perfectly suited to solve. Take that basic format and have it span thirty-four novels, seven anthologies and over two thousand years of history and you get something that is both complex and amazing to read.

Closer to Home is the first book set in Valdemar to really change up that format and I have to say I found it to be better than any other book in the series. Mag’s is already a Herald, we have already had five book describing his years as a trainee and his quest to find out the truth behind his own past. Now he returns to Haven to take up his job as a Herald spy, an almost duplicitous position that I am still a little surprised to find among the Heralds, an organization who by their very nature are honest and open. Yet in this book we get to see Mag’s hide the truth of what he does from his friends and the nobles of Valdemar while he attempts to ferret out plots against the kingdom.

When I look back at Arrows of the Queen and realize that if it were to release today it would probably be classified as YA, it’s a little shocking to see how dark and mature Closer to Home is in comparison. Like any other book or author I enjoy reading, I found myself up till way past my bed time unable to stop reading until I knew just how the story was going to end. Unlike most books or authors I read, the moment I woke up I picked up the book and started it all over again. Now I only have the long and torturous wait until the next book’s announcement and release, I’m not quit sure how I will bear it.

Now if I wasn’t very clear in my ramblings above, I will be as clear as possible here–this book is simply amazing. It is one of the better Valdemar books to date, and to the many people who didn’t enjoy the Foundation series that came before it, the Herald Spy books are shaping up to be so much better. Anyone who is a fan of Mercedes Lackey should definitely pick this book up, and anyone who is a fan of reading and fantasy in general should start reading the entire series. Trust me, you won’t regret it!

Closer to Home is set to be released on October 7th by Penguin Publishing.