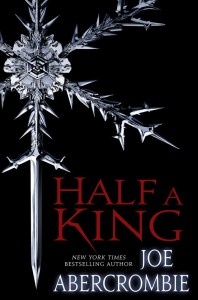 “I swore an oath to avenge the death of my father. I may be half a man, but I swore a whole oath.”

Prince Yarvi has vowed to regain a throne he never wanted. But first he must survive cruelty, chains, and the bitter waters of the Shattered Sea. And he must do it all with only one good hand.

The deceived will become the deceiver.

Born a weakling in the eyes of his father, Yarvi is alone in a world where a strong arm and a cold heart rule. He cannot grip a shield or swing an axe, so he must sharpen his mind to a deadly edge.

The betrayed will become the betrayer.

Gathering a strange fellowship of the outcast and the lost, he finds they can do more to help him become the man he needs to be than any court of nobles could.

But even with loyal friends at his side, Yarvi finds his path may end as it began—in twists, and traps, and tragedy.

Half a King (Shattered Sea #1) by Joe Abercrombie was a book that hooked me early on and refused to let me go. For years everyone I know has been trying to get me to read Abercrombie’s books, telling me how dark and gritty and just plain awesome they can be. So I was not disappointed in how quickly the deaths and betrayals began to pile up so early in the book. With how grim Half a King got throughout the story I was really surprised to find out that it is considered YA, which guarantees I will read the rest of his books to find out just how much darker his other books can get.

At its heart Half a King is both a coming of age and heroes journey story about prince Yarvi, who, with a withered and crippled hand is destined to be a Minister of the kingdom of Gettland. When his father and older brother are are killed, Yarvi soon finds himself forced into a role he is ill prepared to fill, that of king, but the question on everyone’s mind is if a crippled boy can truly be king. Yarvi’s life soon takes a drastic turn for the worse and he’s forced to struggle to survive after a bitter betrayal with the help of a ragged group of misfits and former slaves.

The best part of this book for me was the characters, Yarvi was a complex and realistic person who made made mistakes and did what he had to to survive. Everything he did was aimed at fulfilling his oath and he wasn’t going to let anyone or anything stop him, but that line of thought did not stop him from feeling the guilt or regretting his actions. Then there was the cast of outcasts and misfits he soon finds himself thrown in with. The story would not have been anywhere near as good without them, with Sumael and Nothing really shining as examples of how side characters need not be merely backdrop. No matter how little time each character got in the story they all felt fully fleshed out and believable.

While the story itself may seemed a bit cliched and overdone, Abercrombie puts his own twist on it which makes it seem new again. With all the twists and turns Half a King takes, and all the betrayals Yarvi must face, I found myself constantly wondering just where the story was going to go, and just who Yarvi could trust on his journey. I’m already eagerly awaiting the next book in the series, and eyeballing all the rest of Joe Abercrombie’s books with interest.

I received a free copy of this novel for an honest review.