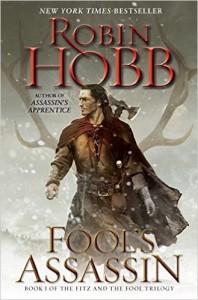 FitzChivalry—royal bastard and former king’s assassin—has left his life of intrigue behind. As far as the rest of the world knows, FitzChivalry Farseer is dead and buried. Masquerading as Tom Badgerlock, Fitz is now married to his childhood sweetheart, Molly, and leading the quiet life of a country squire.

Though Fitz is haunted by the disappearance of the Fool, who did so much to shape Fitz into the man he has become, such private hurts are put aside in the business of daily life, at least until the appearance of menacing, pale-skinned strangers casts a sinister shadow over Fitz’s past . . . and his future.

Now, to protect his new life, the former assassin must once again take up his old one. . . .

Fool’s Assassin: Book One of the Fitz and the Fool by Robin Hobb is the seventh book in the story of the royal bastard and former assassin Fitzchivalry Farseer, and as the seventh book in this series there are minor spoilers ahead if you have not read the previous books. I don’t really have words to describe the way I felt when I heard Robin Hobb was going back to the story of Fitzchivalry Farseer after ten long years away, it was just a mixture of excitement and dread. Excitement for the fact that I may finally get some real closure on the story of the Fitz and the Fool, and dread because life serving the Farseers has never been kind to Fitz. Whenever he has managed to grab something resembling a life of his own he always seems to let it get ripped away from him again.

Fool’s Assassin takes place roughly a decade after the main events of Fool’s Fate and goes into greater detail on the events described in that books prologue. Fitz and his wife Molly live a peaceful life alongside the lady Patience at her country manor Withywoods. Having mostly come to terms with his former life Fitz lives only for the present and the future in an attempt to avoid thoughts of the unresolved events between him and his friend the Fool. Seeming content to live out his life in the country with his wife Fitz actively avoids the intrigue filled events of Buckkeep, no matter how often his former mentor Chade tries to draw him back in. Though he doesn’t realize it, a strange pale skinned messenger’s arrival at his doorstep sets him on a collision course with the past he’s trying to avoid.

To put it simply I thought Fools Assassin was amazing, and I probably couldn’t count how many times I had to put the book down to process some scene I had just read. Or how many times I found myself on my feet in shock or anger and would then have to put the book down and walk away to let my emotions settle or to keep myself from crying like a fool. The best part about it was that the story didn’t go anywhere I had thought it might, and I can honestly say I thought I had imagined every direction it could possibly go. Yet it still managed to zigzag in every single direction and end someplace I had never even considered it might end. I believe there are many scenes that will bring any fan, be they longtime or new, that will have them sitting there in shock over what they had just read

Robbin Hobb’s writing was as good as its ever been, and I found myself completely sucked into the story and unable to put it down. I don’t think I stopped reading to well past seven in the morning and I think that really says something about it, considering I had to be up for work just a couple hours later. It was like revisiting an old friend every time Fitz ran into someone from his past with only a few noticeable absences which I hope will be addressed in the next book. Fool’s Assassin also expands a lot on the skill and just what it means to be a member of a coterie, a clarification I was glad to finally receive.

All in all I would say this book was well worth the read and i will be purchasing it to make sure my collection is complete  once it releases. Although I think anyone could pick up this book and start reading it without being too confused, it would be beneficial to have read the rest of the books in the series. I find myself visiting Hobb’s website at least once a day looking for any announcements about the sequel, and I know I will begin counting down the days till its release once we get an official date, though I dread what the rest of this trilogy will bring us. I believe there are dark days ahead for Fitzchivalry Farseer.

Fool’s Assassin is set to be released worldwide August 12th, 2014