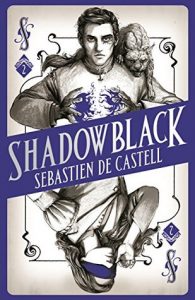 The second book in the page-turning SPELLSLINGER series for all teen, YA, adult and fantasy readers.

It’s a few months since Kellen left his people behind. Now aged sixteen, Kellen is an outlaw, relying on his wits to keep him alive in the land of the Seven Sands. He misses home, he misses family and more than anything, he misses Nephenia, the girl he left behind.

Then he meets Seneira, a blindfolded girl who isn’t blind, and who carries a secret that’s all too familiar to Kellen. Kellen and Ferius resolve to help – but the stakes are far higher than they realise. A Shadowblack plague is taking hold – and Kellen can’t help but suspect his own people may even be behind it.

Shadowblack (Spellslinger #2) by Sebastien de Castell was a fantastic book full of fast-paced action, an interesting magic system, and an intriguing mystery that I was unable to stop listening to once I had started. This was one of those books where I made the mistake of starting it before bed on the assumption that I would listen to a chapter or two and then go to sleep. Except I ended up listening to the entire book and then rolling out of bed to go to work and being exhausted all day long. It was totally worth it though.

I think I can honestly say I loved almost everything about this book but I think the one thing that really stands out about it is the characters and how much they grow and evolve as the story progresses. Sebastien de Castell always does a fantastic job creating believable that are easy to love or hate, but I think he did an especially good job with this series. The growing friendship between Kellen and Ferius and the partnership between Kellen and Reichis really make this book stand out as something special to me. Sadly, however, Seneira was the one character in the book that came across as a little bit boring and underutilized to me — by the time I thought she was finally getting interesting the story was over.

I also think it’s really important to talk about what an amazing job I think Joe Jameson did with his narration of these books. I feel like he really nails the voices of every character in the book and makes the characters come alive in my mind while I’m listening. There were actually certain scenes in this book that I listened to over and over again because he managed to pack his narration so full of emotion that you could feel everything the characters did and I had to experience it more than once. I’m pretty amazed by his narration and right now I think I would definitely rate him as one of my top 5 favorite audiobook narrators.

I think it’s also really important to talk about what an amazing job Joe Jameson does with his narration of these books. I feel like he really nails the voices of everyone in the book and makes their characters come alive in my mind. There were certain scenes in this book that I rewound to listen to more than once because he packed them so full of emotion that you could feel everything the characters did. I thought he was really quite good and at this time I think I would rate him as one of my top 5 favorite narrators.

I can already tell that this is going to be one of those books I know I’m going to recommend every time I see someone looking for something new to read, though I would definitely people start with the first book in the series. Spellslinger was an amazing start to the series and you would be a little lost if you tried to skip it. I’m already really looking forward to the next book in this series and I can’t wait till it releases. Hopefully, it’s not too far off!

This is one of those books I know I’m going to recommend every time I see someone asking for suggestions on a new book to read. I’m honestly sad I didn’t have the self-control to make the book last at least a few days and I’m already looking forward to the next book in the series whenever it releases.