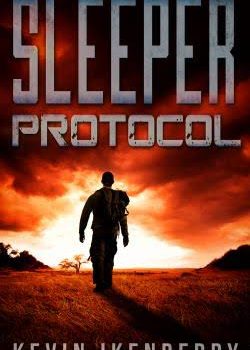 This book has been on my to read list for about a year and a half, but life, as well as my own writing, have kept me far too busy. I have to say I’m sorry I waited so long. This book is phenomenal.

Sleeper Protocol opens with a trope we’ve all seen a thousand times before. The protagonist wakes with no memory of who he is or how he got there, but it quickly diverges from what you expect. He soon learns that he is a “sleeper”, someone whose memories will gradually return as he has more experiences out in the world. Those caring for him refuse to tell him anything, not even revealing why he is missing his memory. He is only told that he’ll have to find them on his own.

Shortly after being released into Sydney, he learns that an AI has been implanted into his brain. This intelligence, named Mally, is intended to help him on his way. As his memories gradually return, he learns that he is a man out of time, a clone of a soldier who died long ago, now brought back to a time that seems to have no use for him. He doesn’t know who is friend and who is enemy. To make matters worse, his constant companion, Mally, seems to be growing increasingly unstable.

Kevin Ikenberry does a brilliant job of introducing us to this fascinating world, three hundred years in the future. The sleeper’s journey drew me in. I wanted him to remember even as I wanted to learn about the world he inhabited. I was eager to find out why he was brought back, and when it all came together at the climax, I was left in utter shock. The only issue I had is that I thought it should’ve ended earlier than it does. The climax was mind-blowing, and I didn’t really need much after that to wrap the story up. Still, that’s a small thing, and Kevin does a brilliant job weaving together the various factions and plot lines. I can’t wait to see where this series goes.