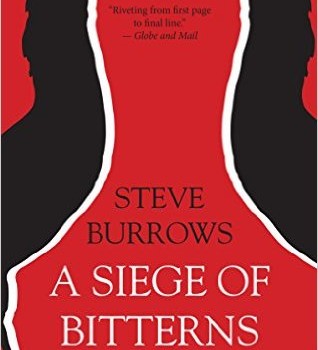 Inspector Domenic Jejeune’s success has made him a poster boy for the U.K. police service. The problem is Jejeune doesn’t really want to be a detective at all; he much prefers watching birds.

Recently reassigned to the small Norfolk town of Saltmarsh, located in the heart of Britain’s premier birding country, Jejeune’s two worlds collide when he investigates the grisly murder of a prominent ecological activist. His ambitious police superintendent foresees a blaze of welcome publicity, but she begins to have her doubts when Jejeune’s most promising theory involves a feud over birdwatching lists. A second murder only complicates matters.

To unravel this mystery, Jejeune must deal with unwelcome public acclaim, the mistrust of colleagues, and his own insecurities. In the case of the Saltmarsh birder murders, the victims may not be the only casualties.

A Siege of Bitterns, by Canadian author Steve Burrows, manages to combine the entirely separate fields of birdwatching and murder in a fun, engaging mystery.

One of my favourite things about the book happens before the book even starts: the acknowledgements. In perhaps the most stereotypically Canadian of moves, Burrows apologizes to the people of Norfolk for implying they’re murderers, and adds that every time he’s been there they’ve been kind and helpful people. He also apologizes to the Royal Society for the Protection of Birds and notes they’re typically a law-abiding organisation. I’ve never seen a murder mystery apologise like that before, and I found it rather amusing.

The book itself, once it starts, is a light and engaging read. The characters are engaging and well-thought-out and their problems and attitudes are realistic and down to Earth. Jejeune, though a good detective, is by no means perfect and makes realistic mistakes and misunderstandings throughout the book, something that doesn’t happen nearly enough in detective fiction. Nothing is contrived to make the mystery drag on longer. Burrows knows when to go into detail and when to let the narrative speak for itself, making for a read that neither bogs the reader down nor leaves them wanting more.

A Siege of Bitterns has a place on the shelf of every mystery lover.