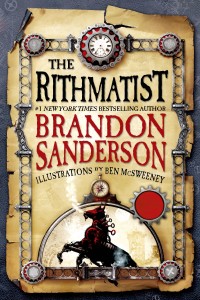 More than anything, Joel wants to be a Rithmatist. Chosen by the Master in a mysterious inception ceremony, Rithmatists have the power to infuse life into two-dimensional figures known as Chalklings. Rithmatists are humanity’s only defense against the Wild Chalklings — merciless creatures that leave mangled corpses in their wake. Having nearly overrun the territory of Nebrask, the Wild Chalklings now threaten all of the American Isles.

As the son of a lowly chalkmaker at Armedius Academy, Joel can only watch as Rithmatist students study the magical art that he would do anything to practice. Then students start disappearing — kidnapped from their rooms at night, leaving trails of blood. Assigned to help the professor who is investigating the crimes, Joel and his friend Melody find themselves on the trail of an unexpected discovery — one that will change Rithmatics — and their world — forever.

The Rithmatist, the first book in Brandon Sanderson’s YA series, was an enjoyable read, with an interesting concept. In The Rithmatist, the magic system is unlike any I’ve read before —  based on chalk drawings which can come to life when drawn by certain people, and have the power to kill. All of this is explained quite well, and clarified through the use of diagrams which helped to enrich the story.

As I said, this was an interesting concept. While reading a story about people who are able to magically draw chalk figures and circles might sound a bit odd, I always find myself looking forward to what Sanderson writes, and what magic systems he comes up with. Though different than his typical style, The Rithmatist did not disappoint, and the back story he created for it — which, not fully revealed in this novel, integrates itself in the world quite nicely, which is an “alternate Earth.”  The world is set in early 20th century, mentioning a lot of familiar figures and locations — America, Europe, Da Vinci.

While I don’t typically read novels intended for young adult or young readers, I still enjoyed this novel thoroughly. Adult readers will still find this to be a satisfying read, it’s just told through a younger protagonist’s perspective.  The Rithmatist is a mix of fantasy, steampunk, alternate reality and mystery; the latter playing a huge role throughout the story.

This definitely wasn’t among my favourite of Sanderson’s novels, though by no means does that mean it was bad. His characters were well-developed, and his protagonist was quite competent. Though, one of the main characters, Melody, grew tiresome at times, as she has a tendency to be obnoxious and self-centered, which you might say, was a bit tragic.

I don’t actually have anything negative to say about this story, it’s one I think Sanderson fans will enjoy (though, they may note the absence of a familiar face), and will appeal to younger readers. Though, as I mentioned it wasn’t my favourite of his, and I’d probably direct readers take a look at any of his other novels first, to get a real taste of Sanderson’s full writing ability.

(Update: 15/05/2013) As aforementioned, The Rithmatist isn’t my favourite of Sanderson’s works, however, since someone asked in the comments:

If you’re looking for a short read, and you’re on the edge about his writing, you can start with his novella, The Emperor’s Soul, though Legion lends itself nicely if you’re looking for one that’s off-the-wall different and fun. If you enjoy heavily descriptive novels, and you’re willing to go in for a long-term commitment, read “The Way of Kings”, it’s the first of 10, and I believe the sequel to be coming out later this year. I really enjoyed it, though, the entire novel is essentially world-building, and sets the stage for later novels, which some people dislike.

Overall though, The Mistborn Trilogy is probably the best gateway into his writing though, and none of the novels are overly long… So perhaps start with those.