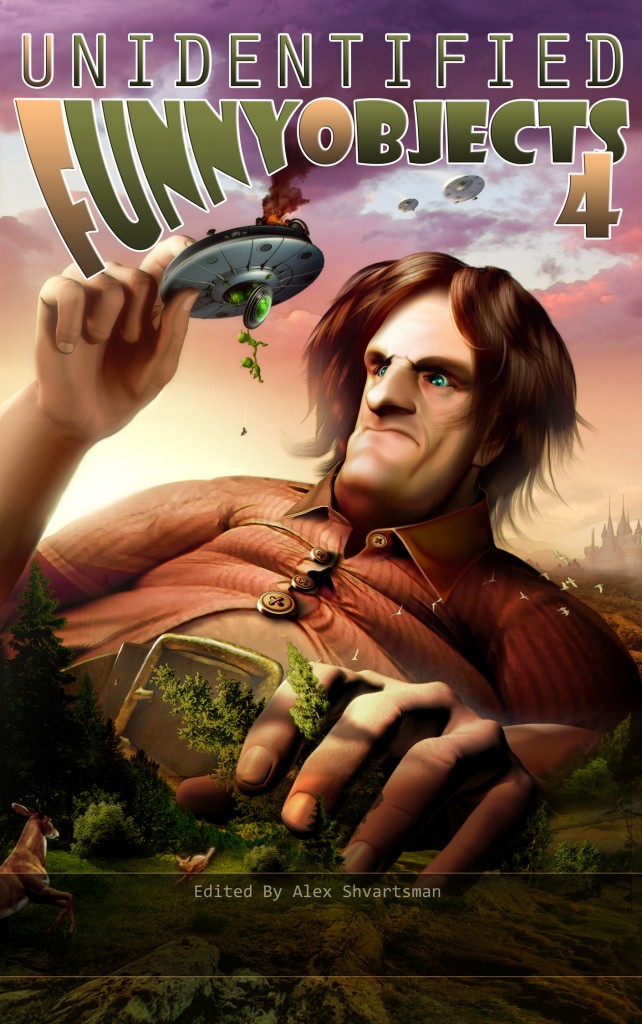 With the increased popularity in crowdfunding, opportunities have opened up for independent publishers to pursue writing projects that previously had been unfeasible. Today I’m going to go into detail about a project called U.F.O. (Unidentified Funny Objects). This project is fascinating to me because it merges several genres that so rarely seem to coincide: fantasy, sci-fi and the game changer, comedy!

For an individual who has never really read much comedy, this is rather intriguing for me. It offers a chance to read great fantasy stories that I am used to and love, only with a comedic twist. We’ve enlisted Alex Shvartsman to tell us a little about his anthology and what makes it work.

Alex was kind enough to answer a few questions regarding UFO2; his current campaign.

What made you decide to create this anthology? It’s a rather unique anthology in today’s market.

A: That’s just it — there is nothing else like it, despite the ample evidence that readers enjoy such fare. There are precious few pro-paying markets that are publishing humorous SF/F. This was frustrating to me as a writer who primarily pens funny stories, and I set out to fill the niche.

So this is the second volume in the U.F.O. series. I understand the first one was a Kickstarter funded project as well. What have you learned from the process and how have you improved since last time around?

A: One of the tough lessons I learned from the first time around is that crowdfunding is hard work. You have to constantly put your project out there, seeking out new audiences and reminding the people who might be interested but haven’t pledged yet that you’re out there. I spend over an hour a day working on various aspects of the Kickstarter campaign: writing updates, contacting bloggers and reviewers who might be amenable to promoting it, and communicating with readers through e-mail and social media. And that’s just during the campaign — the really hard work comes afterward.

Creating a crowd-funded project is a little bit like being a CEO of a publicly traded company. You make the decisions, but you are responsible to your shareholders. And while Kickstarter backers can’t fire me, they can certainly choose not to support my future projects if they are not happy with what their money helped create.

What type of comedy really works for you as a reader? Is there any particular style that is predominantly present in this collection?

A: I like a wide variety of styles, but am especially partial to sarcasm. An engaging character with a great voice who is approaching the world with several extra-large grains of salt will win me over, every time.

Having said that,I set out to collect a wide variety of styles for UFO. What works for me may not be funny to you, and vice versa. So I am looking for great stories with humor elements, something a reader can enjoy even if they don’t find it particularly funny. Based on the feedback I got, this worked for the first book. I don’t know anyone who loved every single story in it, but everyone I talked to enjoyed the majority of the content, and had a few favorites, which were different stories for each reader.

Without giving away too much, can you tell us a bit about one of the stories?

A: I’m very fond of the story by Ken Liu that will appear in UFO2, titled “The MSG Golem.” It it, God starts talking to a little Chinese girl who is vacationing on an interstellar cruise-ship. He instructs her to build a mini-golem and have it chase down the rats that are infesting the spaceship. This story manages to question the sensitive subjects of cultural identity and religion in a way that is wickedly funny but not offensive. The first time I read it was on a subway and I must’ve scared some of my fellow commuters by snorting/laughing into my Kindle.

Will these stories appeal to someone who loves comedy but doesn’t really read the fantasy genre all too much?

A: The goal is to offer something that will appeal to everyone. I want each story to surprise and delight the reader. A variety of voices, genres, and styles to keep things fresh and interesting. I happen to think it will appeal to anyone who enjoys humorous stories, but I’m biased!

I appreciate you taking the time to step away from your current Kickstarter campaign to talk with us today. I along with the team of Arched Doorway wish you and your anthology all of the best!

After having learned a little about this great project, I would like to encourage readers to checkout a crowdfunding site and consider being apart of these great opportunities to create something that is entirely new. I’ve always been a strong advocate of quality work given a new twist, and these types of projects are great sources for a breath of fresh air.

UFO successfully funded their first anthology, and now are on the way to doing so with UFO2. The first of the below links will take you to the campaign page.

Some projects I am currently aware of that I would strongly recommend you give a look and consider backing:

http://www.kickstarter.com/projects/776571295/unidentified-funny-objects-2-anthology-of-humorous – A great guy and friend of mine and the man behind U.F.O.

http://www.indiegogo.com/projects/neverland-s-library-anthology/x/2810126 – My own crowdfunding campaign for an anthology I’m co-editing, Neverland’s Library. (Expect a post about it in the next week or two; awesome things are happening with it — Tad Williams is writing the intro!)