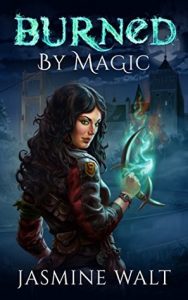 In the city of Solantha, mages rule absolute, with shifters considered second-class citizens and humans something in between. No one outside the mage families are allowed to have magic, and anyone born with it must agree to have it stripped from them to avoid execution.

Sunaya Baine, a shifter-mage hybrid, has managed to keep her unruly magic under wraps for the last twenty-four years. But while chasing down a shifter-hunting serial killer, she accidentally loses control of her magic in front of witnesses, drawing the attention of the dangerous and enigmatic Chief Mage.

Locked up in the Chief Mage’s castle and reduced to little more than a lab rat, Sunaya resists his attempts to analyze and control her at every turn. But she soon realizes that to regain her freedom and catch the killer, she must overcome her hatred of mages and win the most powerful mage in the city to her side.

I was a little hesitant to star this book once I received it, but once I had started it I found myself unable to put it down. Burned By Magic: Baine Chronicles #1 by Jasmine Walt was an action-packed story full of magic and mystery that I read in a single sitting. While the story had its share of flaws I thought they were ones that any debut novel has — Jasmine Walt is a great author and I think all in all Burned By Magic was a good start to what is going to be a great series.

There was a lot that I really enjoyed about Burned By Magic, but I think my favorite part is the world that Jasmine Walt created for it. I loved that all these paranormal creatures like Shifters and magic exist in a world that feels like it should be urban fantasy or steampunk but isn’t. Walt also did a great job really make you feel for the various characters in the book, I got fairly angry at times with how the Shifters were seen and treated as less than human throughout the book, and I think it takes a good author to make you feel something that strongly. The only thing I really didn’t like the book was the main character herself, and honestly, I don’t feel like it really took away from the book all that much. I didn’t find Sunaya Baine to be all that likable of a character, her sarcastic attitude and comments really start to feel forced after awhile and I really hope we see a slight shift in attitude as the series progresses.

Since I received this as an audio book I should probably comment on that a little bit. With some narrators I have trouble at times telling the difference between characters but I think Laurel Schroeder did an excellent job giving every character a voice of their own and giving them the emotional depth I think that they deserved. Normally I have to double the speed of an audio book, but I felt that Schroeder’s reading speed was perfect and to speed it up would have taken away from the story.

I’m really looking forward to starting the next book in the series soon and hope I enjoy it as much as I did this one. While I think anyone who reads fantasy could easily enjoy this book, I think it would be enjoyed even more by those who really love urban fantasy or steampunk. It really doesn’t fit into either of those genres but I think the author took a lot of inspiration from both of them when writing this book and it really shows.