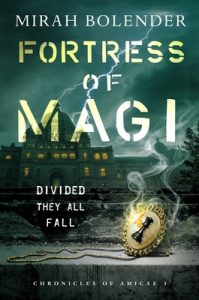 The Hive Mind has done the impossible—left its island prison. It’s a matter of time before Amicae falls, and Laura Kramer has very few resources left to prevent it.

The council has tied her hands, and the gangs want her dead. Her only real choice is to walk away and leave the city to its fate.

I can’t tell you how much I’ve been looking forward to this book since I finished The Monstrous Citadel. Mirah Bolender has become one of my favorite authors in the last couple of years and I’ve had high expectations for this book since the day I saw it announced.  Fortress of Magi was a fun and fast-paced read full of as much action and political intrigue as you could hope for. I read through this book in a single sitting and enjoyed it so much I had to read it a second time just a few days later, and I’m already planning on getting the audiobook when it releases in a few days.

As much as I loved this book and want to do a chapter-by-chapter breakdown of why I enjoyed it as much as I did, I don’t want to spoil anything for anyone who hasn’t read it or the previous two books in the series. So all I will say is that Mirah Bolender did an absolutely fantastic job with Fortress of Magic. She took all the awesome characters that we were introduced to in the previous two books, as well as the amazing world she built around them, and give us what I consider to be an absolutely epic conclusion to this trilogy. Normally after a trilogy or series ends I’m happy with it but have a list of things I wish the author had touched on before the end and I honestly don’t have anything like that with this book.

Fortress of Magi answers pretty much every question I had from the first two books and ties up all the loose ends that I wanted it to before it ended. My only real complaint is that it was so much shorter than the previous two books in the series. Which, in some ways, is a good thing as it allowed the author to tell a much more tightly focused story, but I also just wanted more by the time it was over. Happily,  I don’t think that really takes away much from how much I think everyone will enjoy it.

All in all, I found Fortress of Magi to be a really fun book to read and a great conclusion to the Chronicles of Amicae trilogy. I would happily recommend this book to anyone looking for something to read, though I think it’s obvious that the first two books in the trilogy should be read first as Fortress of Magi probably won’t stand well on its own.