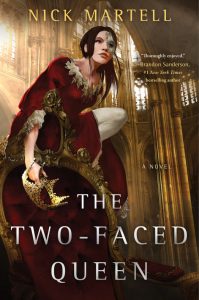 The Hollows is gripped in unrest and on the brink of civil war as an insurgency of anarchists rise, and brother and sister vie for the throne in the second novel in the critically hailed Legacy of the Mercenary King series which Brandon Sanderson called “excellent.”

Michael Kingman thought he was going to die by the executioner’s axe, forever labeled as a traitor. Still alive, and under the protection of the Orbis Mercenary company, Michael and his family and friends are deeply involved in the seemingly rival conspiracies that are tearing The Hollows apart. With the death of the King, both the Corrupt Prince and his sister Serena are vying for the throne, while the Rebel Emperor is spreading lies amongst the people, and all of them want Michael dead. This is a story of betrayal, murder, and rebellion, and in this direct sequel to the debut novel The Kingdom of Liars, also some hope for justice.

For readers who love the intrigue and widening scope of epic fantasy like Sanderson’s Mistborn and Week’s The Black Prism, you will find your next must-read fantasy series.

Every now and then I stumble across a book like Nick Martell’s The Kingdom of Liars and am just amazed by how damn good I found the book to be. So I was both nervous and excited to receive a copy of its sequel to read and review for the Arched Doorway. Excited because it’s always fun to receive books from a new author or series that you enjoy, but nervous because all too often I find that the second book in a series just doesn’t compare to the first. Happily, I can honestly say that isn’t the case with this book at all. The Two-Faced Queen by Nick Martell was everything I wanted it to be and more.

I honestly didn’t know where to start with this review when I finally got the time to sit down and write it because Nick Martell is a great author and I really can’t pinpoint what I enjoyed most about The Two-Faced Queen. The plot, characters, and worldbuilding are just all so good that I can’t tell you exactly which one I like the most. All I can really say is that if you enjoyed The Kingdom of Liars then you will absolutely love The Two-Faced Queen! I will say that while I obviously loved this book, I do think the first quarter of it was a bit slow and tough to get through, but by the end, I was unable to put it down.

I would not hesitate to recommend this book to anyone looking for something new to read, though I would highly recommend that anyone interested in reading it reads The Kingdom of Liars first otherwise they will probably be completely confused. I’m really looking forward to the next book in the series and I can’t wait to see where Nick Martell takes the story next. Until then I’ve decided to buy the audiobook to experience the story again in a new medium.