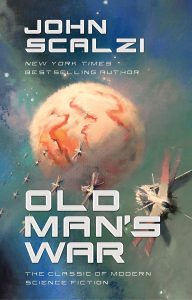 John Perry did two things on his 75th birthday. First he visited his wife’s grave. Then he joined the army.

The good news is that humanity finally made it into interstellar space. The bad news is that planets fit to live on are scarce– and alien races willing to fight us for them are common. So: we fight. To defend Earth, and to stake our own claim to planetary real estate. Far from Earth, the war has been going on for decades: brutal, bloody, unyielding.

Earth itself is a backwater. The bulk of humanity’s resources are in the hands of the Colonial Defense Force. Everybody knows that when you reach retirement age, you can join the CDF. They don’t want young people; they want people who carry the knowledge and skills of decades of living. You’ll be taken off Earth and never allowed to return. You’ll serve two years at the front. And if you survive, you’ll be given a generous homestead stake of your own, on one of our hard-won colony planets.

John Perry is taking that deal. He has only the vaguest idea what to expect. Because the actual fight, light-years from home, is far, far harder than he can imagine–and what he will become is far stranger.

Old Man’s War by John Scalzi is yet another one of those books I keep hearing about and have been telling myself for years that I was going to read but never actually getting around to it. So when I received a copy in the mail a few weeks ago I knew it was finally time to sit down and see why people kept recommending it to me. I’m not really a fan of military science fiction so I honestly didn’t have very high expectations for the book so I was surprised by how much I enjoyed reading it.

Normally it takes me three or four days to read any science fiction book, despite how much I like it, but with Old Man’s War I was unable to put it down until I finished it in a couple of long nights. John Scalzi is obviously a fantastic author and I don’t know How I’ve managed to avoid reading him before this. There was a lot to enjoy about this book but I think the best thing about it is how different it is when compared to any other science fiction book I’ve read in the last few years.

One of the things I loved most about Old Man’s War is how much of the story was character driven instead of being too focused on the technology. I loved reading about John Perry and may need to know what was going to happen with him next is a large part of what kept me reading so late into the night. I love the whole concept of how and why he ends up fighting in the military and can’t wait to see what happens in the next book.

My only complaint about the book would be that the entire tone and focus of the story seemed to shift in the last 100 or so pages. The story goes from being focused on John and the other characters and instead focuses more on the fighting than anything else. I wouldn’t mind this so much if it was a more gradual shift but it felt really abrupt to me and kind of threw me out of the story a little bit.

I still really enjoyed the book however and would highly recommend it to anyone who is a fan of science fiction or fantasy. I’ll definitely be reading the rest of the books int he series and probably everything else by John Scalzi in the next few months.