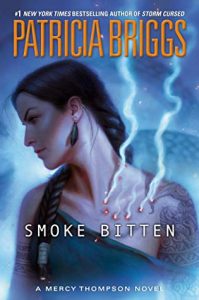 Mercy Thompson, car mechanic and shapeshifter, faces a threat unlike any other in this thrilling entry in the #1 New York Times bestselling series.

I am Mercedes Athena Thompson Hauptman.
My only “superpowers” are that I turn into a thirty-five pound coyote and fix Volkswagens. But I have friends in odd places and a pack of werewolves at my back. It looks like I’m going to need them.

Centuries ago, the fae dwelt in Underhill–until she locked her doors against them. They left behind their great castles and troves of magical artifacts. They abandoned their prisoners and their pets. Without the fae to mind them, those creatures who remained behind roamed freely through Underhill wreaking havoc. Only the deadliest survived.

Now one of those prisoners has escaped. It can look like anyone, any creature it chooses. But if it bites you, it controls you. It lives for chaos and destruction. It can make you do anything–even kill the person you love the most. Now it is here, in the Tri-Cities. In my territory.

Not if I have anything to say about it.

I hate to say it, but I was honestly a bit hesitant to actually start reading this book when I received my cop in the mail a few weeks ago. While I’ve been a huge urban fantasy fan for over 20 years now, I did recently go on a bit of a reading binge with it and kind of burnt myself out on the genre, so I was a bit worried I just wouldn’t be able to get into the book. It took me maybe half a chapter to realize how stupid I was to think that I wouldn’t immediately get sucked into a new Mercy Thompson book.

Smoke Bitten by Patricia Briggs was a fantastic story full of world and characters so detailed and realistic that it’s sometimes hard to believe they aren’t real. Because I was so hesitant to start reading it I made the mistake of starting to read this book at around 8 PM, thinking I would be able to read a chapter and put it down so that I could get some sleep before I had to be up for work at 4 AM. I ended up finishing the book in a single sitting and then going into work on almost no sleep at all.

I can’t talk too much about the plot without spoiling major details for people, but I think I can say this is easily one of my favorite stories in the series so far. The action and pack intrigue starts almost immediately and doesn’t stop until the very last page. Usually, when I’m done with a Mercy Thompson book I can say exactly what my favorite part of the book was but I just can’t do that this time around. The characters, new lore, and plot were all just so good that it’s pretty much impossible to say which part of the story was my favorite.

All in all, I think Smoke Bitten was a fantastic book that was well worth the time spent reading and all the time I will surely spend rereading it over the next couple of years. I would gladly recommend it to anyone looking for something new to read, though I would also suggest any new readers start with Moon Called unless they want to be completely lost on a lot of the series details.