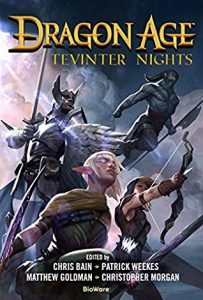 An anthology of original stories based on the dark fantasy, role-playing video game series from Bioware.

From the stoic Grey Wardens to the otherworldly Mortalitasi necromancers, from the proud Dalish elves to the underhanded Antivan Crow assassins, Dragon Age is filled with monsters, magic, and memorable characters making their way through dangerous world whose only constant is change.

I’ve been a huge fan of the Dragon Age franchise ever since Dragon Age: Origins was released back in 2009. I’m pretty sure I’ve played every game in the series and read every book and comic since they first started releasing. So even though I’m a big fan of short stories, I was still pretty excited to receive this book in the mail a few weeks ago and started reading it almost right away. Dragon Age: Tevinter Nights is a great collection of stories by some fantastic authors that was well worth the read!

While I’m normally not a fan of anthologies like this because I find the stories to be a bit too short for me liking, I do think the format works really well for a franchise like this. Dragon Age: Tevinter Nights does a wonderful job of expanding upon and fleshing out the world of Thedas even more. A lot of the stories in this anthology explore parts of Thedas we only see mentioned in the games and the way they are written they definitely feel like they are leading up to a new game in the franchise. Instead of a single linear storyline, Tevinter Nights bounces around a bit and shows us events and points in time that I think really help build out the lore of Dragon Age franchise as much as any of the games do.

I can’t go into much detail on the stories without spoiling things for people who haven’t had a chance to read the anthology yet, but I will say that the Qunari invasion is going to lead the world of Thedas to some really interesting places. One of the things that really surprised me about this book is that I don’t think it contained a single story that I disliked. Though, I will say that both of the stories that Patrick Weekes wrote for Dragon Age: Tevinter Nights were my favorite stories in the entire anthology and would have made the book worth reading even if I didn’t enjoy the rest of the stories like I did.

All in all, this was a fantastic book worth reading and I would recommend it to anyone looking for something new to read, whether they are a fan of the franchise or not. The one thing I think this book really did though was to make me want to go out and buy all the games so I can play them again in preparation for when we get the next game in the series!