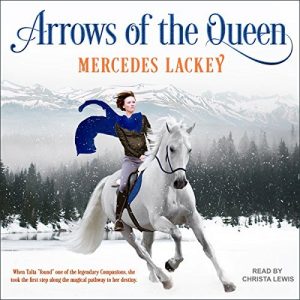 Chosen by the Companion Rolan, a mystical horse-like being with powers beyond imagining, Talia, once a runaway, has now become a trainee Herald, destined to become one of the Queen’s own elite guard. For Talia has certain awakening talents of the mind that only a Companion like Rolan can truly sense.

But as Talia struggles to master her unique abilities, time is running out. For conspiracy is brewing in Valdemar, a deadly treason that could destroy Queen and kingdom. Opposed by unknown enemies capable of both diabolical magic and treacherous assassination, the Queen must turn to Talia and the Heralds for aid in protecting the realm and insuring the future of the Queen’s heir, a child already in danger of becoming bespelled by the Queen’s own foes.

I’ve been an avid reader of science fiction and fantasy for just about as long as I can remember and while my memories of reading most of those earlier books have become a bit fuzzy I can still remember Arrows of the Queen being my introduction to the genre. It’s probably been close to 15 years since the last time I re-read any of the Arrows books so I was pretty excited to see the trilogy was finally being released as audio books. I figured it would be nice to see if I enjoyed listening to the audio books as much as I did reading the series for the first time.

Its amazing to realize how much I didn’t notice or appreciate about Arrows of the Queen back when I first read it. I was only 12 or 13 at the time so I don’t think I really grasped how much the book relies on some pretty basic fantasy tropes and cliches — like being the Chosen One at magic school. Happily,  I think that Mercedes Lackey gives us the perfect example of how you can take those tropes and cliches and give them a unique little twist and turn them into something special. This is definitely a great introduction to who the Heralds and Companions are, what they do, and it honestly makes me fall in love with these books all over again. I’m going to have to go through now and reread the rest of the series.

Another thing that really stands out to me in this book that I don’t think I noticed as a teenager is how far ahead of its time it was in addressing various social issues. Arrows of the Queen takes issues like homosexuality, gender equality, and questions of morality and ties them into the plot in a really natural way that doesn’t come across as preachy or lecturing. I think if there is one thing that Mercedes Lackey does better than almost any other author it is create truly believable characters and plots that make her books stand out when compared to so many others.

Unfortunately I was a little disappointed in the narrator for this book and almost stopped listening a time or two.  I know Valdemar is meant to be a melting pot of people and nationalities so I thought the fact that there was an almost ridiculous amount of different accents in this book was pretty cool and accurate. My main problem was that some of the same characters from the same family or region had completely different accents from each other. It really throws you off at times when people who are siblings or who grew up together sound like they are from different parts of the country. I also found the speed and pacing of her narration was a bit erratic at times which can be a bit confusing, especially when it often happens in the same chapter.

All in all though I would say that I loved this book as much as I did as a teenager if not more and can’t wait for Arrows Flight to release as an audio book later this year. It’s not my hope that Mercedes Lackey will keep releasing her older Valdemar books as audio books like she has been for the last year or so.