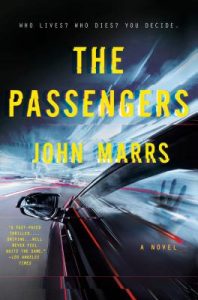 You’re riding in your self-driving car when suddenly the doors lock, the route changes and you have lost all control. Then, a mysterious voice tells you, “You are going to die.”

Just as self-driving cars become the trusted, safer norm, eight people find themselves in this terrifying situation, including a faded TV star, a pregnant young woman, an abused wife fleeing her husband, an illegal immigrant, a husband and wife, and a suicidal man.

From cameras hidden in their cars, their panic is broadcast to millions of people around the world. But the public will show their true colors when they are asked, “Which of these people should we save?…And who should we kill first?”

I have to admit that I was a little bit hesitant to agree to a review of this book when I was first asked about it a few weeks ago. I’m not really a fan of the genre and I’ve never read anything else by the author, but since it sounded pretty interesting I figured I would at least give it a try and see what I thought of it. I found The Passengers by John Marrs to be a suspenseful read that kept me on the edge of my seat reading it all night long. I actually read this book in a single sitting because I thought every chapter ended in such a way that it left me needing to know what happened next and so I couldn’t stop reading until I had finished it.

I think one of the main reasons I enjoyed this book as much as I did is because of how on-topic I found the subject matter to be. We currently live in a world where self-driving cars are being tested all across the country every day by dozens of different companies and the entire time I was reading The Passengers I was thinking how the story was almost a little too believable. The thought of self-driving cars honestly scares me a little bit because I can see the plot of this book becoming a reality all too easily.

John Marr’s did a fantastic job creating some truly believable characters with this story and making us care enough about them to honestly worry and stress over who would or wouldn’t survive. This is the first book in a long time that made me want to read the ending so I wouldn’t be so on edge the entire time I read the book. I’m glad I didn’t though because while I enjoyed the entire book, I found the ending to be particularly good and I don’t think it would have had the same meaning or impact if I had read it early.

All in all, I think this was a really well-written book full of great characters and enough suspense to keep you from putting it down to the end. While I mostly read fantasy I would not hesitate to recommend this book to anyone reading this blog and I definitely think I’ll be checking out the rest of John Marrs’s books. If they are even half as good as this book is they will all be well worth the read.