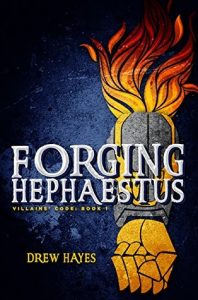 Gifted with metahuman powers in a world full of capes and villains, Tori Rivas kept away from the limelight, preferring to work as a thief in the shadows. But when she’s captured trying to rob a vault that belongs to a secret guild of villains, she’s offered a hard choice: prove she has what it takes to join them or be eliminated.

Apprenticed to one of the world’s most powerful (and supposedly dead) villains, she is thrust into a strange world where the lines that divide superheroes and criminals are more complex than they seem. The education of a villain is not an easy one, and Tori will have to learn quickly if she wants to survive. On top of the peril she faces from her own teacher, there are also the capes and fellow apprentices to worry about, to say nothing of having to keep up a civilian cover.

Most dangerous of all, though, are those who loathe the guild’s very existence. Old grudges mean some are willing to go to any length to see the guild turned to ash, along with each one of its members. Even the lowly apprentices.

I’ve enjoyed all of Drew Hayes books I was honestly a bit hesitant to buy this audiobook when it showed up on my suggested reading list earlier this month. I find most of Drew’s books to be funny and fairly lighthearted and this book sounded like it was going to be something a bit more serious, plus I’m not that big a fan of stories told from the POV of the villains. So I was more than a little surprised by how much I loved this book.

Forging Hephaestus (Villains Code Book 1) by Drew Hayes was a well-written and surprisingly deep story about the life of a villain in a world of Superheroes and one of the best pieces of superhero fiction I’ve had the pleasure to read.

One of the things I love about Drew Hayes is the way he takes old or overused tropes and cliches and puts his own unique spin on them and somehow manages to make them interesting again. This is something we go to see clearly in Forging Hephaestus in the interesting powers the heroes and villains develop as well as the ways in which they develop those powers. I also loved the way that in this world it’s the villains who are more concerned with keeping the carnage and chaos to a minimum while the heroes seem to be more concerned with maintaining their good PR than actually saving and protecting people.

I also think that Amy Landon’s absolutely fantastic narration played a huge part in making this book come alive for me like it did. She gave every character in Forging Hephaestus their own unique voice and put so much emotion into her narration that you could almost feel everything the characters in the book did. I enjoyed her narration so much I’ve actually already bought another audio book just because she was the narrator and I really hope she finishes the series.

I really can’t recommend this book enough and think anyone who is a fan of Drew Hayes or superhero fiction would really love this book. I don’t know how long it’s going to be until the next book in the series released but the wait is already killing me.