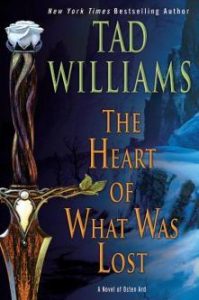 The Heart of What Was Lost takes place in the half-year after the end of To Green Angel Tower, and tells of the attempt by Isgrimnur and a force largely made up of Rimmersgard soldiers to destroy the remaining Norns as they flee back to their homeland and their mountain. It also answers some questions about what actually happened in the immediate aftermath of the fall of Green Angel Tower.

It’s been nearly 15 years since I first read The Dragon Bone Chair by Tad Williams, but I can still remember finding it at my local library like it was yesterday. My love for the story of Osten Ard was almost instantaneous and has persisted through the years, so I was ridiculously excited back in 2014 when I heard that Tad Williams was going to follow up Memory, Sorrow, and Thorn with another trilogy. While my friends were out celebrating the new year at the bar I was home in bed reading The Heart of What Was Lost, which I managed to read in a single sitting, I didn’t even realize it was already 2017 until I looked up from the end of the book at nearly 3 AM.

I didn’t read anything about this book before I started reading, all I knew was that it was a story of Osten Ard, so I wasn’t quite sure what to expect from it. I’m more than happy I can say The Heart of What Was Lost was everything I had hoped it would be and more. One of my biggest concerns, when an author returns to a series after so many years away, is that it will lose something of what makes it so special. The Heart of What Was has everything that made Memory, Sorrow, and Thorn so beautifully magical. If I didn’t already know better I probably wouldn’t even be able to tell that it has been over 20 years since Tad Williams last visited the story of Osten Ard.

The Heart of What Was Lost is a must read for fans of Tad William’s Memory, Sorrow, and Thorn Trilogy as it tells the story of what happens in the 6 months following the events of To Green Angel Tower. However, I would suggest that anyone who already hasn’t should read the original trilogy before picking up a copy of this book, as it;s meant to bridge the gap between it and the new trilogy that starts releasing later this year.

It may be only a few months away but I’m already eagerly awaiting the release of The Witchwood Crown, because of this book is anything to go by, it’s going to be amazing.