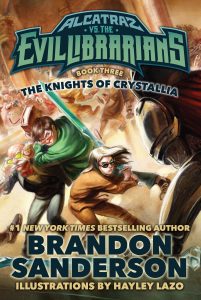 When Alcatraz and Grandpa Smedry make a pilgrimage to the Free Kingdom city of Crystallia, the Smedry home base, Alcatraz is shocked to see that he is, in fact, a legend. When he was a baby he was stolen by the Evil Librarians, and his mother, a Librarian herself, was behind the whole scheme. Now, with his estranged father, who is acting indeed strange, Bastille, who has been stripped of her armor, and Grandpa Smedry, who is, as always, late to everything (that’s his Talent), Alcatraz tries to save a city under siege. From who? Why, the Librarians of course!

The best part of having gotten a late start on this series is that the wait between books — I’m reading them as they rerelease is relatively short. I enjoyed the first two books in this series quite a bit, and Alcatraz Versus The Knights of Crystallia has everything of those first two books and more. The entire Alcatraz series may be aimed at children or teenagers but I found myself laughing the entire way through it. Like every other Brandon Sanderson book, I found myself unable to stop reading this one once I started it, it was another sleepless night for me.

The Knights of Crystallia has a lot going for it, it’s well-written, has an interesting plot, some great characters, and of course is written by Brandon Sanderson. However, I think the greatest thing it has going for it is the humor. I think the last time I laughed so much at a book was when I was reading the previous book in the series. The main thing that makes these books so funny to me are just how silly they are. Sanderson takes a ridiculous story and tells it as seriously as possible and I find the results hilarious. For some people, the family friendly cursing or the constant breaking of the third wall might get old or annoying, but for me, it’s still funny three books in.

Next to how funny the books are, I think the best part of the rereleases is that they are fully illustrated. Hayley Lazo does an amazing job with the cover and interior art. Having some of the more ridiculous scenes illustrated really adds something to the book and made it easier to lose myself in the craziness of the story. I’m already looking for the next book in the series to release and until then will have to make do with rereading one of the authors many other books.

I would recommend this book to anyone who is a fan of authors like Rick Riordan, Christopher Paolini, and John Flanagan. I would really suggest that anyone just starting the series start with the first book, though, otherwise you may be completely lost.