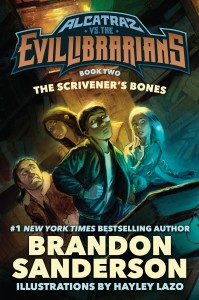 In this second Alcatraz adventure, Alcatraz finds himself on a mission to meet Grandpa Smedry when he gets swept up by a flying glass dragon filled with his unusual and mouthy Smedry cohorts.

Their mission? A dangerous, library-filled one, of course!

They are on their way to the ancient and mysterious Library of Alexandria (which some silly people think was long ago destroyed!) where they must find Grandpa Smedry, look for clues leading to Alcatraz’s potentially undead dead father, and battle the creepy, dangerous soul-sucking curators who await them.

It may have only been a few days since I reviewed the first book in this series, Alcatraz VS The Evil Librarians, but I enjoyed it so much I had to read the second one before I started anything else. Brandon Sanderson has done it once again, I didn’t think it was possible but I thought The Scrivener’s Bones was as good as, if not better than the first book. It’s proven to be difficult to review this book without it looking almost identical to my last review, but I decided that is alright. Like the first book in the series, The Scrivener’s Bones has proven itself to be surprisingly funny, although, since this is the second book in a row that has made me laugh that hard, I don’t know why I’m surprised.

When I started this book I was a little bit worried that the self-aware, fourth wall breaking nature of the main character would grow tiresome, but Sanderson does a great job with it. One of the few things I forgot to bring up in my review of Alcatraz VS The Evil Librarians was that all of the new re-releases come with brand new covers and are fully illustrated. Hayley Lazo is a great artist and if you haven’t looked at any of her work before I think you definitely should now, and I think she did a wonderful job with the illustrations for both of the books released so far. I find it easy enough to get sucked into a story, but when something is as ridiculous as Alcatraz can be, the illustrations depicting some of the more bizarre scenes just make it even better. I look forward to seeing what else she and Brandon come up with for the rest of the series.

There wasn’t really anything I disliked about this book, there is a great story and some quirky, yet lovable characters, and as stated above I laughed more times than I can count. I’m really looking forward to The Knights of Crystallia when it releases later this April, and to the rest of the series after that. The covers all look great and if those stories are as weird and funny as the first two are I know they will be amazing. I think anyone who is a fan of Brandon Sanderson or the style of self-aware YA fantasy popularized by books like Percy Jackson or the Maximum Ride books, then I think you will enjoy this one. Brandon Sanderson does it so much better I think.

I will say, however, don’t read these books if you love librarians as I once did. There was no one else I know who could tell me exactly where to find that author or book I really wanted to read. Now, though, who knows how much you can really trust them, they are hiding so much from us.