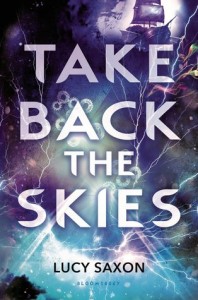 Desperate to escape an arranged marriage and the life her high-ranking government-official father has planned for her, Catherine Hunter does the unthinkable in the fantastical world of Tellus: she disguises herself as a boy and stows away on a skyship, ready for a new life in a new land, one where the general population isn’t poverty stricken and at the mercy of the cruel officials. What she isn’t quite ready for is meeting Fox, a mischievous and alluring young crew member aboard the Stormdancer – or discovering that the ship is run by smugglers.

While faced with a future she doesn’t want and a world she doesn’t understand, Cat discovers dangerous secrets from her past. Will she finally have the chance to find where she truly belongs?

Debut author Lucy Saxon weaves an enthralling tale of adventure, intrigue and romance, where the mysteries of the past just may be the key to the future.

Take Back the Skies is a book that I like to call deceptively gripping. You think you can put it down easily and go on with other tasks, but that’s not the case; you go on reading past the chapter break, you dwell on it when not reading it, and you pick it up as soon as you have the chance, all without realising the hold it has on you. Deceptively gripping books have always been some of my favourites, because you never realise until they’re done how much they meant to you.

This book is one populated by fascinating characters inhabiting a richly-developed world. As a protagonist, Cat is refreshingly determined, but never pig-headed. She reacts in a very human manner to everything that comes her way. She’s an easily relatable character and likeable throughout. More broadly, all the characters play off each other nicely and were very real and well-rounded, making the book an enjoyable read. The world of Tellus is richly-developed and very real – Saxon’s real strength is how she created slang, social norms, and cultural habits for her characters that makes it seem like its own world and not just a thinly-veiled copy of our own.

The last third of the book is occupied with the climax and I found this part of it especially gripping. It wasn’t overly drawn-out or tiring to read, but rather an exciting ending where the book grabbed and didn’t let go, leading to a slightly bittersweet but wholly satisfying epilogue. I was unable to do much for nearly an hour after finishing the book, far too occupied with the ending and the emotions it inspired in me.

Perhaps the best thing about the book, however, is Saxon’s knowledge of when to give just enough information without slowing the reader down. A few sentences here and there in the right place, and the reader gains a wonderful sense of Cat’s childhood and relationship with her parents. She pulls no punches, putting all her characters through real hardships, but also giving them real victories. The book delivers a few emotional punches, but makes it well worth it by the end.

Whether you’re a long-time steampunk fan or just getting into the genre, Take Back the Skies has a place on any reader’s bookshelf.