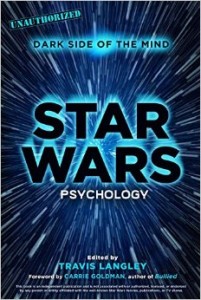 From its very first frame, the Star Wars series created a compelling universe, with complex characters and engaging storytelling. In advance of the highly anticipated new movie, Star Wars: The Force Awakens, this essay collection offers a fascinating and unauthorized psychological analysis of every aspect of George Lucas’s richly rendered galaxy. Expert contributors led by Travis Langley (Batman and Psychology: A Dark and Stormy Knight; The Walking Dead Psychology: Psych of the Living Dead) examine such topics as family ties, gender, values, villainy, and heroism itself. They shine a light into the hidden part of the psyche and reveal the ultimate lesson of Star Wars.

We have less than two months until Star Wars: The Force Awakens releases in theaters all over the world, but the obsession has already started. Everywhere I turn these days I see Star Wars toys, Star Wars collectibles, Star Wars everything. So we at the Arched Doorway figured why not get in on it ourselves?

Thanks to Sterling Publishing we are able to offer a copy of Star Wars Psychology: Dark Side of the Mind to one lucky winner.  Enter below and goodluck!

Due to shipping concerns this giveaway is open to North American residents only.

Travis Langley is a professor of psychology at Henderson State University and author of Batman and Psychology: A Dark and Stormy Knight (Wiley, 2012) and The Walking Dead Psychology: Psych of the Living Dead (Sterling, August 2015). He’s a regular speaker on the subjects of heroism and pop culture at psychology conferences and fan conventions, including San Diego Comic Con, New York Comic Con, and the Comics Art Conference. He writes an online column “Beyond Heroes and Villains” for PsychologyToday.com.