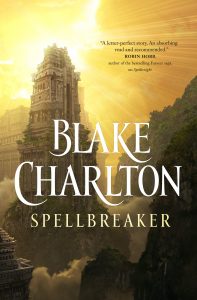 Leandra Weal has a bad habit of getting herself in dangerous situations.

While hunting neodemons in her role as Warden of Ixos, Leandra obtains a prophetic spell that provides a glimpse one day into her future. She discovers that she is doomed to murder someone she loves, soon, but not who. That’s a pretty big problem for a woman who has a shark god for a lover, a hostile empress for an aunt, a rogue misspelling wizard for a father, and a mother who–especially when arguing with her daughter–can be a real dragon.

Leandra’s quest to unravel the mystery of the murder-she-will-commit becomes more urgent when her chronic disease flares up and the Ixonian Archipelago is plagued by natural disasters, demon worshiping cults, and fierce political infighting. Everywhere she turns, Leandra finds herself amid intrigue and conflict. It seems her bad habit for getting into dangerous situations is turning into a full blown addiction.

As chaos spreads across Ixos, Leandra and her troubled family must race to uncover the shocking truth about a prophesied demonic invasion, human language, and their own identities–if they don’t kill each other first.

I try not to read or review the last book in a series unless I have already done so for the first, but Spellbreaker by Blake Charlton sounded too good for me to pass up. It didn’t take much time for me to decide to take a chance and read it, and I can honestly say I’m glad that I did.

Spellbreaker was a beautifully written, fast-paced story that I found difficult to put down once I had picked it up. I enjoyed this story much more than I honestly expected to and I think I would have to say that it is because of the characters. To say that Leandra Weal and her family are troubled and dysfunctional would be a huge understatement. The disturbing relationship that she has with her family and the way they interact and converse had me laughing throughout most of the book, which is probably one of my favorite things to do while reading.

While I really enjoyed the story itself I did find it a bit confusing at ties, as I probably do with anything that involves prophecy and a multitude of possible futures. The story was suspenseful enough that it kept me on the edge of my seat as I tried to guess what was going to happen next.

I think it’s also important to point out to people that while this may be the third and final book in the trilogy, it was obviously written to stand alone as well. I’m sure reading the previous books would have helped to fill in a lot of the backstory, it’s not required to do so. I had no problem reading Spellbreaker and enjoying it completely. The only problem I have now is that I’m going to have to spend money on the rest of the series. I really want to read some more.

This really was a great book to read and we at The Arched Doorway have been lucky enough to provide a chance for someone else a chance to read it as well, courtesy of Blake Charlton and Tor Books.

Open to North American residents only, follow the instructions below and enter for a chance to win!

Come Take A Look At These Other Great Stops On The Blog Tour: