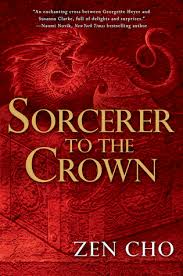 At his wit’s end, Zacharias Wythe, freed slave, eminently proficient magician, and Sorcerer Royal of the Unnatural Philosophers—one of the most respected organizations throughout all of Britain—ventures to the border of Fairyland to discover why England’s magical stocks are drying up.

But when his adventure brings him in contact with a most unusual comrade, a woman with immense power and an unfathomable gift, he sets on a path which will alter the nature of sorcery in all of Britain—and the world at large…

I don’t normally read much regency fiction, I’ve found that the genre tends to contain too much romance for my liking, and relies on it a little too much to drive the story forward. I am however, a bit of a fanboy when it comes to urban fantasy so I decided to give Zen Cho’s Sorcerer to the Crown a try in the hopes that it would focus more on the fantasy and less on the romance. Sorcerer to the Crown turned out to be an excellent read, with some great characters and a fascinating world for them to live in.

Zacharias Wythe is the Sorcerer Royal, the leader of the Royal Society of Unnatural Philosophers and one of the most powerful sorcerers in the world. At a time when he should be securing his position and seeking out allies, Zacharias must venture forth to the closed borders of Fairyland in an attempt to discover why England’s magic levels have fallen to an all time low. He is soon set on a path that will bring him into contact with one of the strangest women he has ever met, and their meeting may change the history of Britain forever.

While I thoroughly enjoyed reading this book and was unable to put it down until I reached the end of it, it did take me most than one try to get into it. There is no denying the fact that Sorcerer to the Crown is a bit slow to start, with the story getting bogged down a little in the detailing of sorcerers of London. Once you make it past the first few chapters however, and start to see what the magical world is like outside of London, it is surprisingly easy to get sucked into the story.

Sorcerer to the Crown contains everything you could want in a good fantasy book, there are Dragons and Magicians, Witches and unholy curses, and the hidden world of Fairyland connecting it all. I really hope that in the next book in the series we are given an even broader view of the magical world outside of Britain, and a deeper look beyond the borders of Fairy. It seemed like a fascinating place to visit, its inhabitants coming across as both charming and terrifying all at the same time. I’m dying to know more about them both and can’t wait to see what Zen Cho has to offer us next.