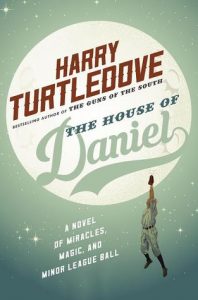 Since the Big Bubble popped in 1929, life in the United States hasn’t been the same. Hotshot wizards will tell you nothing’s really changed, but then again, hotshot wizards aren’t looking for honest work in Enid, Oklahoma. No paying jobs at the mill, because zombies will work for nothing. The diner on Main Street is seeing hard times as well, because a lot fewer folks can afford to fly carpets in from miles away.

Jack Spivey’s just another down-and-out trying to stay alive, doing a little of this and a little of that. Sometimes that means making a few bucks playing ball with the Enid Eagles, against teams from as many as two counties away. And sometimes it means roughing up rival thugs for Big Stu, the guy who calls the shots in Enid.

But one day Jack knocks on the door of the person he’s supposed to “deal with”—and realizes that he’s not going to do any such thing to the young lady who answers. This means he needs to get out of the reach of Big Stu, who didn’t get to where he is by letting defiance go unpunished.

Then the House of Daniel comes to town—a brash band of barnstormers who’ll take on any team, and whose antics never fail to entertain. Against the odds Jack secures a berth with them. Now they’re off to tour an America that’s as shot through with magic as it is dead broke. Jack will never be the same—nor will baseball.

I’m not usually a fan of alternative history, and I’d never read anything by Harry Turtledove before receiving this book, but I was unable to resist saying yes when offered a copy. I don’t think I’d seen someone take The Great Depression and fill it with wizards, werewolves, and the walking dead but The House of Daniel does so and it’s not as ridiculous as it sounds. It may have taken me a couple weeks to start reading this book once I had received it, but it didn’t take me long at all to finish it. This was a weirdly fascinating story from start to finish and I was glad I had the chance to read it.

I’ve been trying to write this review for days now but it’s proving to be one of those books that I can’t quite find the words to properly describe. I will say that as weird as it was, it was still one of the better books that I have read so far this year. I loved the main character and found it easy to empathize with his motives and the aspects of urban fantasy that lace the book are great. The author does a fantastic job of sprinkling magic and magical creatures throughout the story with enough details to keep the book interesting without bogging down the story too much.

As I said above, I’ve never read anything by Harry Turtledove so I don’t know much about him, but I’m going to assume he loves baseball. The amount of time he had to have put into describing the various games played in The House of Daniel is a little crazy. I learned more about baseball reading this book than I probably wanted to know. I’m not a fan of the sport so at times the amount of detail that was put into it was a little bit too much for me at times. The only thing that kept me from being surprised or disappointed was the fact that it is made abundantly clear early on that this is a book about baseball. Even though I’m not a big fan of the sport I still thought this was an extremely good book that I’m sure I will read again more than once in the near future.

I think anyone who is a fan of alternative history, urban fantasy or Harry Turtledove will enjoy this book as much as I did. Anyone who is a fan of baseball will probably enjoy it even more, it’s pretty much written for such a person. I really hope to see more books set in this same world as I think there is a lot of potential to build upon, but if that doesn’t happen I’m glad to know there are plenty of other books by the author to read