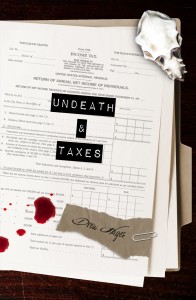 After discovering just how filled with magic, intrigue, and adventure the parahuman world of being an Undead American can be, Fredrick Frankford Fletcher did exactly what was expected–he became a certified parahuman accountant. Myths and legends, as it turns out, are not so great at taking appropriate deductions and keeping their receipts, and Fred is more than happy to return to a life others view as woefully dull, expanding his accounting business to cater to various monsters and their respective financial needs.

Said monsters are, unfortunately, still spectacular at pulling Fred into trouble, though. And despite merely wanting to stick with simple paperwork, Fred once again finds he is going to have to deal with enchanted weaponry, government agents, possessed houses, and one enigmatic dragon’s interest. In the parahuman world, any business can turn deadly, even one as mundane as accounting.

The one problem I’ve discovered with reading as much urban fantasy as I have been these last few years is that it has become increasingly difficult to find new books or authors to read that really stand out. So many authors seem to follow the same basic format that at times they can kind of blend together and become difficult to tell apart. I fully expected Undeath and Taxes by Drew Hayes to be one such book, and was pleasantly surprised to find it refreshingly different. I don’t know how I never heard of Drew Hayes before I got the email asking if I would be interested in reading it, but I will be shocked if I find another urban fantasy book I enjoy more this year.

Prior to the events of this book Frederick Fletcher was living the life of your average overworked CPA when the unthinkable happened — he was bitten by a vampire. When he himself turns, Fred quickly discovers there is an entire world out there full of deadly supernatural creatures and mythical beings just waiting to be explored. What else is there for Fred to do but start training in earnest and do the only sensible thing: become a CPA for all the things that go bump in the night. Being an accountant to the parahuman world is not as safe as he expected it to be and Fred often finds himself drawn into conflicts no normal CPA should ever have to deal with.

You wouldn’t think that a book about the somewhat mundane life of a vampire CPA would be all that interesting to read, but Undeath and Taxes will surprise you. Drew Hayes has managed to take one of the most boring jobs in the world and turn it into an amazing story. One of the more interesting things about this book is that it is broken into four separate stories. While all four stories are connected and told in chronological order, each story could probably stand well enough on its own. I have already gone back through the book and just read my favorite two stories on their own.

While I would suggest that anyone who plans to read Undeath and Taxes should read the previous book in the series first, it’s not necessary. I loved the first book as much as I did this one and just think everyone else would enjoy reading it as well. I already eagerly await the announcement of Drew Hayes next book, if Undeath and Taxes is anything to go by, it will be amazing.